At Donington Park the Intersport duo of Kevin Clarke and Wayne Gibson claimed another Britcar Dunlop Production GTN win to add their Rockingham success, confirming their status as the team to beat in the championship.

In the hyperbole packed, 'read me!' 'read me!' world of motorsport writing the term 'domination' is overused. But for the 93 lap, two hour display at Donington it is entirely justified.

The car led every single one of the 93 laps run around the 1.98 mile track. The pair had such a lead, that when it came to their pitstop the lead simply decreased from a gap measured by lap charts to a one measured a stop watch.

Their best lap of the race – 1:13.329 set by Clarke soon after taking the wheel in the stop – would not have disgraced some of the GT teams, and was one-and-a-half seconds better than anything anyone else could offer.

Though slower than the 1:12 in qualifying the advantage remained the same – as did their nearest competitor, Reflex Racing's Ginetta G50. In the race the car – shared by father and son Peter and Matt Smith – slipped back from its starting spot in the early laps, before an early driver change to put the younger Smith in the cockpit saw a resurgence, and the second best time of the race – an achievement the 22-year-old was rightly proud of.

However, reliability gremlins limited the team to just 36 laps, before driveshaft problems brought their race to a premature end, the younger Smith already writing off their championship title challenge.

Reflex Racing were not the only team to fall out of the race early. The Hogarth's SEAT completed only four laps before turbo issues knocked them out of the race. Also an early faller was the BPM Racing Ginetta. Owen Thomas and Ashley Woodman continue to struggle slightly with their new car – the rear wheel drive Ginetta following their previous front-wheel drive machinery – and a selection of early spins picked up where they left off at Rockingham.

Perhaps the most disappointing early retirement was the Go Green Motorsport emblazoned Honda NSX of Robert Fenn and Rob Barff. One of the best looking cars on the combined Britcar grid, and by far the fastest Class 2 entrant in qualifying, Fenn had only completed 13 laps when a driveshaft failure left the car stranded at pit entry.

The demise of the NSX in its first appearance this season left the class two battle to the same pair that fought over the lead at Rockingham. James May and Alex Osborne in the APO Sport SEAT and Anthony Wilds and Ian Lawson in the ING Sport BMW.

Like the bulk of the Production runners, both teams would make only one pitstop, but stop proved to be the turning point of the race.

May had started the SEAT, and led the class, though often only a handful of seconds ahead of Lawson in the BMW as the battle in the slowest class in the field fitted around the faster traffic.

Lawson was the first to stop – pitting early after completing just 38 laps. May brought the SEAT in five laps later, but while the BMW slipped only two laps to the Production leading car, Osborne rejoined the track having lost nearly four minutes in the pits, rather than the normal two.

The delay would have cost May and Osborne the race, had it not been for ING's own mistake. Speeding in the pitlane, an offence punished – like every other on the day – with a two lap penalty. 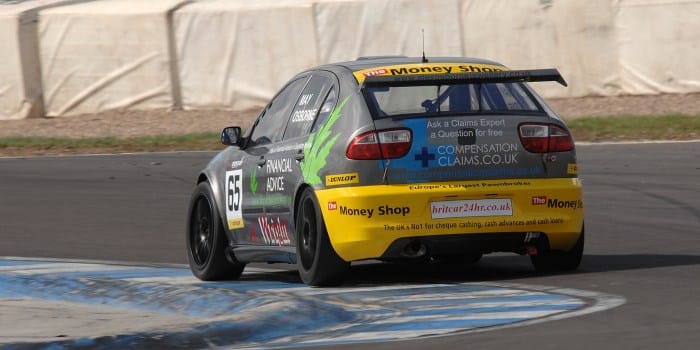 The penalty deleted the on track advantage, putting them both on the same lap. Wilds' call into the pits at the end of the final lap left the official margin at the end of the two hours artificially large, but the gap on track had been closing through continually. Wilds had been consistently faster – reeling in the APO Sport entry by at least two seconds a lap – in the closing shrinking the deficit to only 12 seconds on the final representative lap.

“We had a good strategy – we had a full tank and we thought we'd just run it – keep it on the track, keep it consistent,” said May after the race. “We got quite unlucky with a few things, but you make your own luck. We had a bit of brake fade, but that was about it really apart from that the tyres were a little worn, but it was all good.”

Behind Intersport the honour of second place was held by the SG Racing SEAT of Peter and Mark Cunningham for much of the race. For the opening 50 laps of the race Mark Cunningham stayed on the lead lap behind the leading BMW, before handing over to father Peter.

Mark later related the story of the race; “we had a pretty bad qualifying and we set the car up completely for wets and didn't have any new slicks so we ended up qualifying on the slicks we'd just with at Rockingham, so as you can imagine they were shot to pieces. During the race we went from eighth to second in two laps, so we had two stonking laps through the field.”

“The Clarke and Gibson car had pulled a such a gap that we couldn't really get them back, but we were matching their times. Towards the end of my stint we started having a bit of trouble with traffic – cars pushing me off in places where there was no way they were going to get through and it got a bit fraught really. You still try to give as much respect as you can but there are some places where they can't get through and they're virtually causing collisions.” 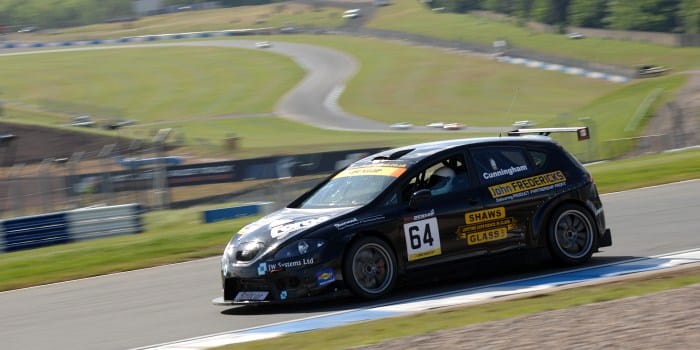 The Cunninghams of SG Racing looked destined for the podium, before contact and a puncture

In second place they remained until a contact at Coppice left the car with a puncture that forced an extra stop on lap 70 that dropped them three laps down, Mark reflecting on a “comfortable” podium chance lost.

At the Cunninngham's expense Adrian Watt moved into second place in his Class One Invitation entry. He too would lose ground with a pitstop, leaving Jenson Lunn and Sarah Bennett–Baggs to pick up second for Strata 21 – a result that would be repeated by the team's GT entrant in a successful day for the team.

Watt's day tailed off in the closing laps, lapping slower and slower and falling to fifth behind the Mazda MX5 driven by Mark Ticehurst and Owen Mildenhall and the Cunningham SEAT.