He lapped the 3.66mile Grand Prix Silverstone Grand Prix circuit in 2:03.880, laying down a time that survived the final two-thirds of the half hour session. Adam took the first stint in the team's Aston Martin DBRS9, and once the car's tyres – fresh rears and fronts Adam described as “slightly scrubbed” had reach optimum temperature was able to set a time that would not be surpassed.

Adam explained the challenges of the session; “it's so cold out there it takes a few laps to get [the tyres] working and you have to patient to find the gap. There's 30-odd cars out there so it's a case of both getting the gap and putting the lap together as well.”

“Yesterday was good day in testing, we had good pace in fourth overall and we never ran new tyres yesterday. We had a big gain on new tyres today. The lap actually felt really good but we were up on our second set but unfortunately got blocked out the back. The car's been on it all weekend and Andrew's really come on this weekend, he's driving really well so race wise we should be right there.”

At the time the lap was nearly four-tenths faster than the next best offering – Matt Bell's 2:04.253 – but the advantage was whittled down to just 0.197 seconds by Richard Westbrook back as co-driver to out-going champion David Ashburn in the no.1 Trackspeed Porsche.

Bell, and then Michael Guasch were unable to improve on their own early time, and the title contending pair slipped to fourth as a result – sharing the second row with United Autosports teammates Zak Brown and Joe Osborne who are making a one-off appearance in the British Championship, though both have been regular drivers in the European GT3 Championship.

Despite their inability to improve on the time from Bell's first flying lap the Anglo-American team ended the session as the best placed of the serious title contenders.

Duncan Cameron and Matt Griffin, who lie second in the championship – one spot ahead of Bell and Guasch – recorded the sixth fastest time (2:04.557) to head a train of five Ferrari 458 on the timesheets that also includes championship leaders Jim and Glynn Geddie.

The elder Geddie – Jim – struggled for pace in the first half of the session, bringing the car back to pits down in 16th fastest. Predictably Glynn was able to move the Apex Tubulars sponsored Ferrari up the order, though he waited until their were eight minutes left in the session to jump up to eighth fastest. Michael Lyons and Charles Bateman – who lie fourth in championship points after their Donington Park win will line up eleventh. 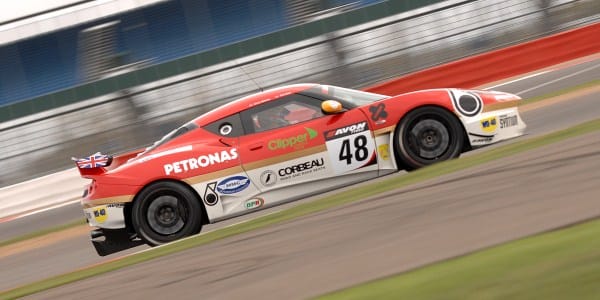 Phil Glew set pole position in GT4 for Lotus Sport UK, just 0.006 seconds quicker than the Scuderia Vittoria Ginetta G50 of Dan Denis and David McDonald. Champions elect – they need only finish in the top six in the seven car field – Marcus Clutton and Peter Belshaw – were fourth quickest, though over a second down on the class pole.

Glew told The Checkered Flag; “Chris went out first and he suffered with a little bit of oversteer which we had kind of predicted with the way we had the car set up with the new fronts. When I went out I had new rears on and it felt mega – it felt really, really good the car – It only lasted for couple of laps but that's all we needed and then it starts to fall off a cliff. Had a bit of oversteer but I managed to get pole in those few laps. Unfortunately I got held up by a bunch of GT3s and GTCs on every single one of my laps so I didn't quite get the best out of the car.”