I want to start off by saying sorry for this being so late, usually I try and get my blog done as soon as the meetings are finished so that we can get them online for you to read but this one got put on hold.

The best place for me to start this is as the story has gone, the last round of the Ginetta Junior Championship was held some time ago now at Silverstone. Just hearing the word fills me with excitement, racing on a track with the history and character of Silverstone is incredible, an honour.

Before testing began I had a session on the simulator at Izone driver performance which I have to say was excellent, the whole company centres around improving the ability and performance of racing drivers at the highest level, everything they said there was right and the facility that they are developing constantly is outstanding. My session was mainly on the simulator however I wasn't just learning the Silverstone National circuit I would be testing on in the afternoon but I was developing my skills in eye positioning on the track and other controllable features of driving a car. I think the experience was valuable, I certainly learnt a lot and would recommend it to any other driver. You can learn more about developing your ability as a driver and then use the simulator and training facility to prepare for race weekends; it is something I would like to do more often.

Moving onto Friday practice at Silverstone, I was confident I could be quick from past experiences at Silverstone but the day just didn't go my way. I ended the day as one of the slowest cars, some of this was down to me and the rest was all about getting a slip stream down the straights. I knew that I could gain a lot of time by just having a good qualifying strategy, something I think others had done in practice better than I had. All had not been restored in morning warm up on Saturday, I was still at the back over a second off the front, I knew by then that I wasn't doing anything wrong on the whole track so it must have been a tow down the straights or having a different set-up on the car, but in actual fact that felt quite good.

Qualifying was a completely different story, I started off well but ended even better, my last three laps felt good, I managed to be super consistent and quick and pulled off three times within a tenth and a half of each other. I was very happy to have qualified 6th and then 5th for the second race. I had managed to turn it round from a nightmare test day to a brilliant qualifying that saw me nearly match my best performance of the year.

With this new found pace I went into the first race with confidence, in the first few laps I got through to fourth and was sat behind the leaders. I then had a bad couple of laps and fell down through the order to 6th and got caught up in another battle and lost time. I thought I had passed the group and was then aiming to get back up into podium contention when I received a little nudge from Jake Giddings in the last corner which nearly spun me round; I lost a lot of time and two positions and fell into the clutches of William Foster who passed me on the last lap. I finished 9th, I was quite cross with myself for letting such an opportunity pass for a podium finished but I knew that I had the pace to run at the front in the second race. With the passing of the race the chance of finishing 3rd in the championship also passed. I knew that 4th was on the cards but 5th looked the likely finishing position.

So I went into the last race confident that I could finish the year off with a podium. The pace was there from Qualifying and the first race and starting from 5th on the grid was one of my best chances. I was with Charlie Robertson at the start and we got away equally well, I kept my foot in at the first corner and drove around him to be 5th after the first corner. As we came out of Brooklands on the first lap Sennan Fielding span and I nearly collected him, I just scraped past but had to use the run off area to do so. I then charged Brad Bailey and the leaders down and was hanging onto the back of Brad. We were running at the same pace as Niall and Seb in front and I think we could have challenged but I had to get past Brad to do that. At some points of the track I was quicker and other parts he was so the gap kept changing a little.

George Gamble had closed in on the back of me and then pulled Declan Jones along with him; George passed me at Copse with a very late move which also lost me 5th to Declan. I fell back from that pack and so set about catching them back up, with two laps to go I was within touching distance of Declan but on the last lap I had to go for a move. I got a better run on the exit of Copse and opted for the outside line for Maggots putting me on the inside for Beckets. I went in hard knowing that I could run Declan wide on the exit meaning that he wouldn't get me on the exit. George tried a similar move on Brad but it was quite late, they made contact and started to spin and crash, I saw this and thought “great we've got a podium here” and so I aimed my car for the very inside of the circuit to try and avoid the accident.

Unfortunately I ploughed into them wrecking my chances of a podium and 5th in the championship. I went through two gravel traps and then down the back straight I had no bonnet attachment. As I accelerated the bonnet came up so I had to back off. Brad Bailey came past me on the run to the line to cap off my worst lap ever. My results for the weekend were about my worst of the year, something went wrong in both races and it cost me heavily. I finished 6th in the championship when I should of been 5th. It was all down to the last round and it was going well up until we had two corners to go. I had 309 points, Will Foster had 310, it was so gutting to know that had that last lap crash not happened I would have been another place higher in the championship. 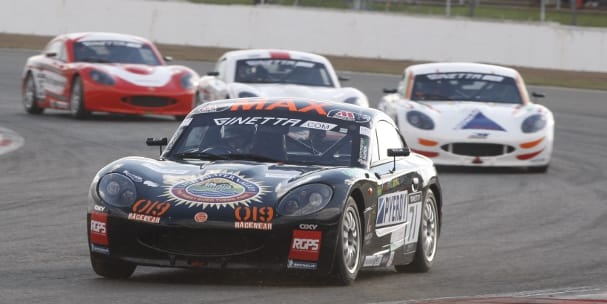 Mistakes in both Silverstone races cost Max fifth in the championship

Looking back I have had rounds that have gone well, rounds that haven't but all the while I have had the most amazing time. Racing in the Ginetta Junior Championship is such a privilege, it is fun, fast (although some may not agree with that) and close. I have enjoyed the last two years so much. AT the end of Silverstone when we had packed up I walked through the garage by myself and into the pit lane. I stared up the pit lane, then walked to the edge of the track and looked back up there too, and with a tear in the eye said “Goodbye”. I knew, at that point in time, that it could be the very last time I am ever able to do that.