Eric McClure will skip the Nationwide Series event at Darlington this Friday as he continues to recover from his horrific accident at Talladega last weekend.  McClure was an innocent victim in a pileup caused by contact between eventual winner Joey Logano and Michael Annett, which spun Kevin Harvick into Brad Keselowski with mayhem ensuing behind.  McClure's no. 14 hit the inside wall head-on at unabated speed, and had to be cut from his car by rescue crews during a 19-minute red flag period.  Thanks to the SAFER barrier, the HANS device, and the supreme strength of modern cars, McClure's condition was not life-threatening, suffering merely from concussion and mild internal bruising. 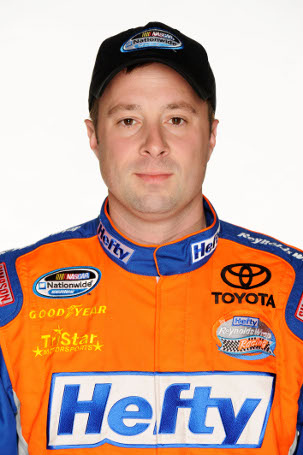 “I'm doing okay – about as well as can be expected,” the 33-year old Virginian said. “I'm definitely sore and battling some things this week. It's obviously been a very long week for me and my family. I'm thankful – I'm thankful to be here and certainly very thankful for the safety initiatives and everything NASCAR's put on display over the years.”

McClure said he does not recall everything that happened, but is sure that the car suffered brake failure.

“I remember bits and pieces of everything. It's very spotty at times after the impact. I just remember being really excited – we were in a good position and I felt like I had an opportunity for our first top-10 and we were just in a pack there. Saw the smoke ahead of me and went to hit the brake pedal and the brakes were not there. At that point, I just remember getting hit by someone and going towards the wall. At that point, I just braced for impact and that's really all I remember until after the accident.

“It's a little bit of a heart-sinking feeling right there and, obviously, that created the impression that I was speeding up or going faster than everyone when I hit. Obviously I was – I'm just glad it wasn't worse.”

McClure was released from the University of Alabama-Birmingham Medical Center on Monday, but has unsurprisingly not recovered in time to race.  He will be replaced in the No. 14 TriStar Motorsports Toyota by Jeff Green.

“I really hate not being in the car here [Darlington]. I really like this place and I feel like I've been fast here,” McClure said.