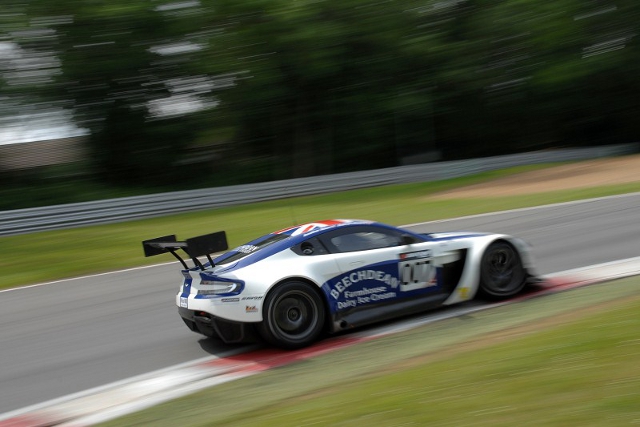 Jonny Adam took a Beechdean Aston Martin Vantage re-shelled after Andrew Howard's Rockingham crash to the top of the timesheets in the second practice for the Avon Tyres British GT Championship.

Adam topped the times early in the session before championship leader Matt Griffin moved ahead with a lap of 1:26.729 after twenty minutes of the hour long session. In turn he was displaced by Tim Harvey, piloting the Demon Tweeks backed Trackspeed Porsche he shares with Jon Minshaw. The former Touring Car driver – and Porsche Carrera Cup champion – went four-hundreths faster than the Ferrari driver but only held the top spot for a few minutes before Adam returned to the head of the times.

Practice one paceman Aaron Scott was again on form for Scuderia Vittoria, moving into second place he and Adam circulated close together, the Aston driver setting the fastest time by over half a second before Scott immediately cut the advantage by going second fastest. On the following lap Adam's next improvement went unanswered by Scott, the Vantage completing a lap of the Grand Prix circuit in 1:26.077, 0.460 seconds better than Scott's best from the previous lap.

British GT debutant Nicolas Armindo set the third fastest time for Trackspeed in the #31 he shares with David Ashburn for the weekend, with Harvey's best time demoted back to fourth place.

MTECH and Rosso Verde Ferraris finished the session fifth and sixth fastest, RJN Motorsport seventh fastest, but only because of a late improvement by Alex Buncombe in Nissan GT-R. The other Nissan on the grid, that of Benji and Freddie Hetherington was ninth best, the two Japanese cars sandwiching the Porsche of Steve Tandy and Joe Osborne.

The Stark by Hepworth Ginetta G55 – shared by Ian Stinton and Jake Rattenbury – was tenth fastest ahead of the troubled Motorbase Porsche of Michael Caine and Daniele Perfetti which was limited to just 12 laps with diff problems. The sister Porsche ended the session in the Paddock Hill gravel trap after a tyre blew out from underneath Steve Parish after completing just eight laps.