Caine, who shares the Motorbase Performance Porsche with Daniele Perfetti, set the best lap in the second of the hour long sessions, lapping the 2.06 mile track in 1:23.752. The time – both in the combined times, and the second session – put them above the Rosso Verde Ferrari 458 of Hector Lester and Allan Simonsen. In topping the sessions both duos had been the only ones to run a lap below 1:24

The Ferrari pair had topped the earlier session with a time of 1:23.800, but failed to improve in the second hour as Caine, Motorbase and the Porsche squads in general stepped up in the final running before the afternoon qualifying session. The second Motorbase car – of Steve Parish and Stephen Jelley – set the third fastest time (1:24.206), despite their running coming to a premature end when Parish spun and crashed the car on the exit of Gracelands with quarter of an hour remaining.

Trackspeed pair David Ashburn and Phil Keen made it a third Porsche in the top four time while Beechdean's Aston Martin completed the top five best times of the practice sessions with a 1:24.326 set less than ten minutes into the early session.

Oulton Park winner Ecurie Ecosse struggled for speed in the first session but rebounded in the second, topping the times during the middle part of the session before Caine bested them . The opposite was true of the Jones brothers and the Preci–Spark Mercedes SLS, who set the fifth fastest time in the first session but failed to lap within 1.5 seconds of their own time in the second session.

After a pretty luckless weekend in Germany last month Team WFR Ginetta G55 pair Riki Christodoulou and Jody Firth proved their pace again with the third best time in the first session, though they too did not improve in the second session as so lay only seventh best in terms of combined times, one spot behind Ecurie Ecosse. 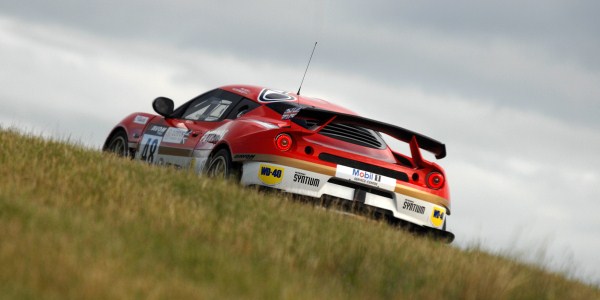 Phil Glew laps in the no.48 Lotus topped GT4 in both sessions with class points leaders Jody Fannin and Warren Hughes second in both sessions. The diminutive Mazda MX5 completed just eight laps in the two sessions, failing to record a time in the first session as the Jota run team battled a turbo problem that had the car trailing smoke.

Another to struggle was the Predator CCTV Ferrari 430. The Adam Wilcox and Phil Burton driven car failed to set a lap time in the first session due to a problem with the ECU, but completed a full second session, with 30 laps and a time good enough for 15th best overall.

By James Thompson
5 Mins read
The RAM Racing Mercedes of Sam de Haan and Patrick Kujala overcame a spin at the start to take their first British GT victory of the year and grab the championship lead after an enthralling three hour endurance race at Donnington Park.
British GT

By James Thompson
1 Mins read
Yelmer Buurman went quickest in Free Practice 2 as the RAM Racing team continued to dominate he Donington Park round of the British GT Championship.