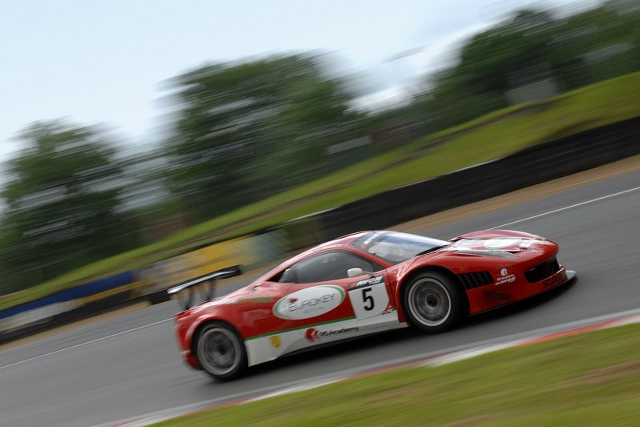 Aaron Scott topped the first practice session for the Avon Tyres British GT Championship at Brands Hatch, the fastest man in a 1-2-3 for Ferrari teams in the championship.

Scott, driving the #5 Ferrari 458 Italia for Scuderia Vittoria followed Allan Simonsen and Matt Griffin to the top of the times in Ferraris. Griffin – who currently leads the championship with teammate Duncan Cameron – was the first Ferrari man to post a best time just after the mid-point in the 60 minute session.

Irishman Griffin beat both Motorbase Performance Porsches to take the top spot, but his time was surpassed by Simonsen in the shamrock adorned Rosso Verde 458, the Dane lowering the benchmark time by nearly half a second to 1:27.211 around the Grand Prix track at the Kent track.

Simonsen's time held the top spot only for a few minutes before Scott move ahead consecutive personal best laps. With the first Scott, who is running a British GT schedule alongside a Blancpain Endurance Series campaign, split Simonsen and Griffin and with the second he jumped to the top of the time, nearly seven-tenths faster than Griffin.

Those times remained unchanged through the final third of the session as all three Ferrari men gave way to their teammates – the gentlemen drivers of their respective pairings.

After the Porsche dominated weekend at Rockingham in the last round Motorbase drivers Stephen Jelley and Michael Caine were on the pace immediately, the halfway point of the session turning with the cars first and second in the times, but with the Ferrari surge were demoted to fourth and fifth at session's end.

By comparison the trio of Trackspeed Porsches struggled for time, though all three ended the session in the top ten times. The #33 car of Tim Harvey and Jon Minshaw was the best of the three, nearly three tenths ahead of Rockingham winners Steve Tandy and Joe Osborne. Osborne's session got off to an uncertain start he as he and George Murrells both ended up in the Paddock Hill gravel, reportedly after separate incidents.

The recovery of the two cars caused the only red flag of the session, though they were not the only visitors to the Paddock Hill Bend gravel trap, a mistake by Matt Bell sending the new Audi R8 LMS Ultra of United Autosports off the track, thankfully causing – on first appearances – minimal damage to the car he shares with Charles Bateman.

At the same time as Bell's off the Team WFR Ginetta G55 stopped on the exit of Graham Hill Bend with a worryingly terminal looking failure. Their GT4 counterparts – Warren Hughes and Jody Fannin – also suffered a troubled session – troubled by water temperature issues, then power steering problems in their Ginetta G50, leaving them last of the six GT4 entrants.

The class was topped by Phil Glew in the lone Lotus Evora present for the weekend, 2.4 seconds faster than Zoe Wenham, who put the #42 Century Motorsport Ginetta second with her final lap of the session.