Three of the biggest names in the American Le Mans Series (ALMS) GT field are celebrating a century of starts in the championship at this weekend's race at Lime Rock Park.

JÃ¶rg Bergmeister, Jan Magnussen and Bill Auberlen represent three of the different manufacturers in the class – Porsche, Corvette and BMW respectively – and before the weekend's race the task was given to the three men's teammates and rivals to pay tribute to them.

“There's no one quicker at getting up to speed and pushing for lap times every single session of the weekend than JÃ¶rg,” says the German's long time Flying Lizard Motorsports teammate Partick Long. “He's a master on the technical side and he can drive a car that's outside the window of handling better than most; he can take a subpar, unbalanced car and put on the edge like no one I've ever seen.”

“But there are some times when that catches him out! My first race in 2005 at Sebring, Lucas [Luhr], JÃ¶rg and I were driving together. It was raining, and we all decided to take it easy on the car because there was no forecast for rain for the race. In typical fashion, JÃ¶rg went out there hauling it and the team kept getting on the radio telling to take it easy and that he was easily the quickest car on the track; we just needed to shake the car down. He came in, and we asked him how the car was. He said everything was good and he was taking it easy.”

“The photo on the front page of the Sebring paper the next day was of him spinning down the frontstretch through all the cones at the pit exit and bowling them all over. You can see his helmet clear as day! We all came in that morning and asked him, 'So you were taking it easy, right?'

Now part of the BMW Team RLL squad, as he has been since the team's ALMS debut in 2009 Auberlen's ALMS CV spans the entire history of the series, starting with drives in prototypes in BMW V12 LMR and fearsome Panoz prototype. A move to BMW Team PTG for the 2006 season put he and Joey Hand in same car for the first of four seasons together.

Hand, who currently drives the sister BMW M3 for Team RLL to Auberlen's, comments on his teammate; “Bill is highly intense. You see it when he leaves the pits; he wants to be the fastest. I was always a little more mellow but took that attitude and tried to do the same thing. The first time I drove with him was 2001, and we were teammates from 2005 through 2010. I hope he saw my passion for racing and a high level of intensity. It's always fun to help somebody, particularly if that person shows well. Maybe he saw I could win and that with some help from him, I could win more.”

“When we're on the road, he's my family. We share rental cars, hotel roomsâ€¦ we eat breakfast and dinner together. Every morning we stop at McDonald's and get McDonald's together – sometimes I have to drive because he has to have his pancakes and sausage.”

“Bill has systems and he sticks to them. He's definitely more sorted out than I am. I'm more into winging it. I don't know which hotel we're going to; he has directions printed out. I don't fold my clothes; he has them nice and tidy. A lot of people ask if Bill is high-maintenance, and I would say he's not. He is just very switched on to everything – especially with anything that has to do with cars. There's a lot of stuff I can do, but the difference with Bill is that he can build the car from the ground up. He can build the engine; he can tune the engine even with today's computer controls. He built a motorcycle and a boat from the ground up. He's one of those guys that when I have a question, I go to him. The only other person I go to is my dad. He just knows a lot of stuff.”

“I have a ton of respect for him and what he does racing on a weekly basis all around the world. It's very fitting for him to have his 100th ALMS race at Lime Rock where I've heard so many stories of him driving from the back to the front and also witnessed itâ€¦ in a BMW too!”

Though now part of the Corvette Racing team Magnussen's first seasons in the ALMS were with Panoz driving an LMP-1 Roadster for the works team. Through 2000, 2001 and 2002 Magnussen shared a Panoz with David Brabham. After three years with Panoz Brabham was paired with the Dane for a further season in a Prodrive run Ferrari.

“I remember the first time he drove the Panoz,” says Brabham. “He blitzed the lap record at whatever track we were. We were like, “Holy cow, who is this kid?” Then I went and tested after that and matched his time or went a tenth quicker – I can't remember. From that point on, there was this raised competition because he was a super strong teammate and he was very good for me. He was super-quick and I had to raise my game. We bounced off each other so well and had a fantastic time at Panoz. We conquered Audi on several occasions together which was no mean feat. We probably couldn't have done it unless I had someone like Jan next to me. He was a brilliant asset to have on the team.” 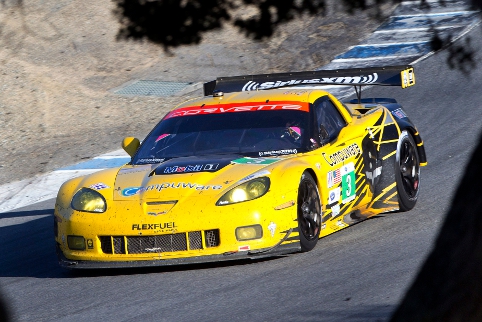 Part of the team since 2003 Magnussen has followed Corvette from GT1 to GT2 (Photo Credit: Richard Prince/Chevy Racing Photo)

“When he first came to Panoz, he was very quick but there were lots of things about him that needed to improve. The longer we spent together and in the years later on, he understood more about what he had to do in sports cars. He developed certainly into a really good sports car driver. At the time, one of his great abilities was that it didn't matter what the conditions were or the way the car was, he just got in and drove the wheels off it. I think that's a great thing for Jan. You threw him into any situation and he was blindingly quick. It was a thing where my game got raised, and then his game got raised. There were times when one of us was half-a-tenth quicker and it turned into “Hey Jan, what was it like to get spanked today?” or vice versa.”

“When he first turned up, I would go out and set the car up and I'd bring it into the pit. He'd have a cigarette in his mouth and ask “Is it ready Brabs?” He'd put his foot on the cigarette butt, jump in the car and drive the wheels off it. That's how the relationship worked!”

“It was a productive ego, not a destructive ego. Both of our egos were in control enough where we worked together, pushed each other and egged each other on. At the same time, if Jan was quicker than me, I pushed to be quicker than him. But it wasn't in a reckless sense. We didn't destroy cars because our egos were out of control. They were controlled egos, if there is such a thing!”

Brabham would go onto a rival of Magnussen's after the latter moved to Corvette, facing off against each other in the GT1 classes in ALMS competition.