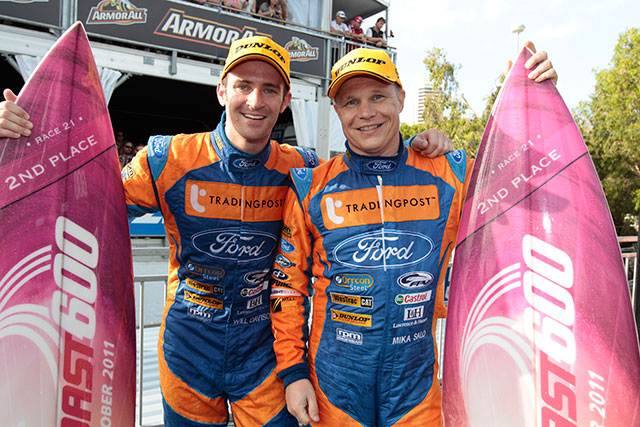 Ford Performance Racing has re-signed Finn Mika Salo for the Armor All Gold Coast 600 in October.

The veteran of 109 Formula 1 Grand Prix starts and two Le Mans 24 Hours GT2 class wins will line up on the on the streets of Surfers Paradise for the third straight year and his second consecutive year as partner to Will Davison in the #6 Tradingpost FPR Falcon.

The pair finished second in the first race last year and were well placed to take victory in the Sunday finale before a puncture dropped them out of contention. And the 45-year old is keen to go one better this year.

“I am really happy to be coming back to the Gold Coast to race with Will and FPR,” Salo said.

“I have unfinished business as it was great to finish second last year but we were robbed of a win on the Sunday when we got a puncture.

“Will and the team are going really well so far this season so I am very confident we can again be at the front.

“The Gold Coast 600 is one of the best events I have done outside of Formula 1. It is a great mix of exciting racing, a good location and a good party. I can't wait to come back in October.

FPR Team Principal Tim Edwards says Salo was a hit on and off the track in 2011.

“Everyone at the team is really excited to know Mika is coming back for the Gold Coast race as last year he proved that not only is he quick and consistent but also a lot of fun,” he says.

“Unlike most Finnish drivers he is very chatty and having raced with a lot of British teams in Formula 1 he has a wicked sense of humour and fits in really well with the close-knit environment we have at the team.

“Good times aside, Mika knows that this is a championship round for us and when the helmet goes on he is quick and provides great feedback. He is the perfect sort of driver for the Gold Coast event.”

Salo is the second co-driver to be confirmed at FPR for the October event, with Nick Heidfeld announced as co-driver to David Reynolds in the #55 The Bottle-O Racing Team car.