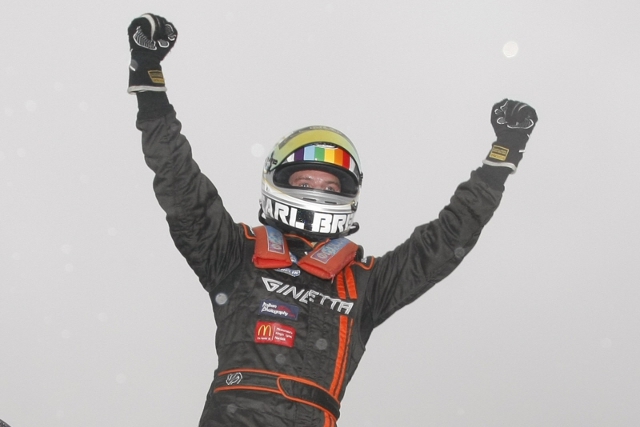 Carl Breeze and Total Control Racing became the Michelin Ginetta GT Supercup champions after a hard-fought performance in the final rounds of the season at Brands Hatch.

After finishing runner up in the Supercup last season, and the G50 Cup in 2010, Breeze finally secured the title with a podium treble at Brands, with The Kings Lynn-based racer poignantly dedicated the triumph to his late sister Sarah, who tragically lost her life in a road accident a decade ago.

“It’s been a hard, long fight, we were over 100 points down at one point – TCR is the best team in the country”, said the 33-year-old, “I’d like to dedicate this championship win to my sister, Sarah, who lost her life 10 years ago. She last saw me win the Formula Renault UK Championship – this is for you sis.”

After qualifying fifth on the grid, Breeze’s title chances were massively helped in race one when championship leader Tom Sharp suffered a driveshaft failure, Breeze finishing second. A third in race two was replicated in race three, securing him the championship.

The title is Breeze’s first since he won the Formula Renault UK crown in 2001 and TCR’s first success since winning the SEAT Cupra Championship with Jonathan Adam in 2008.

“It’s great to get the job done”, said team principal Lee Brookes, “We’ve been so close the last couple of years, Carl used his head this weekend and did exactly what he needed to. With him not starting the season with us, from that far back in the points when we came back into the championship in June we really didn’t think there’d be a chance to challenge for the title. That makes it more special.”

Breeze’s team-mate Jamie Orton has a mixed weekend meanwhile. A prop-shaft failure ruled him out of race one, before mechanical problems forced hit to pit in race two. He made amends in race three though, scything his way through from the back into sixth place.