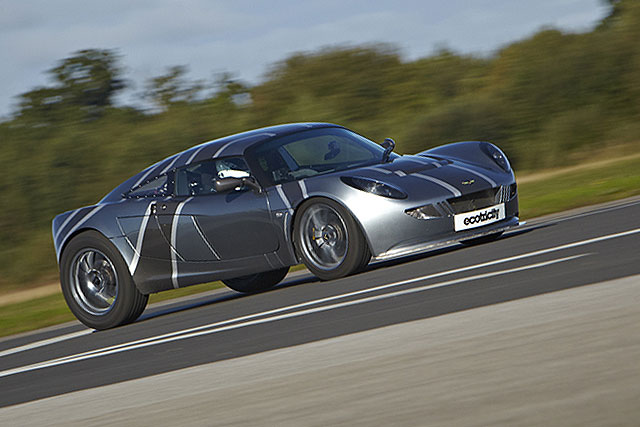 The idea for the Nemesis comes from Dale Vince OBE who founded the world’s first green electricity company, Ecotricity. The car was designed and built entirely in the UK and beat the previous record of 137mph set by the grandson of legendary Sir Malcolm Campbell.

The Motor Sport Association was on hand to officially verify the record as the Nemesis reached an average speed of 151mph over two runs up and down the runway.

Dale Vince said: “This is brilliant. We built the Nemesis to smash the stereotype of electric cars as something Noddy would drive – slow, boring, not cool – and I think we’ve done exactly that today.

“Hopefully this will further stimulate debate about the future of transport in Britain and how we’ll be getting around when the world runs out of oil.

The energy used in the record breaking run was made using by Ecotricity’s network of 53 windmills around the UK making it 100% green power.

“What we’ve been able to demonstrate is that wind-powered cars are not just feasible, but can be a load of fun.” commented

Ponting said: “It hasn’t really sunk in yet that we are in the record books. It was nice to break the record once and then smash it again – which proved a point really. They’ve done such a good job with the car. It’s an amazing result.”

The Nemesis project started out as a second-hand Lotus Exige which was dismantled and rebuilt from the ground up to become the record breaking car. Engineers lengthened the chassis by 90mm, lowered and shifted the centre of gravity forward, fitted a cluster of 96 lithium-ion polymer cells that sit in a carbon-fibre and Kevlar fire resistant coating with ceramic fire suppression system, two brushless motors, a completely new transmission, and a lot of electronic wizardry.

With a range of 100-150 miles the Nemesis can be charged in under 30 minutes using the rapid-charging infrastructure.