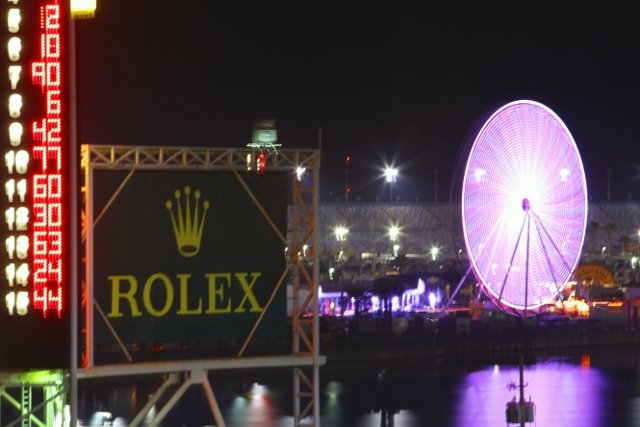 After two caution periods during the last the race progressed into hour 15 under green and promising a mouth-watering proposition with the top 7 cars being separated by just 22 seconds. This battle was being mirrored in GT with 8 cars on the lead lap at the top of the hour.

Juan Pablo Montoya signalled his intent for the rest of the race by increasing the pressure on his team mate Jamie McMurray in the Chip Ganassi Racing with Felix Sabates cars, with the #01 car prevailing, then posting some of its quickest laps of the race so far.

The #5 Action Express Racing car being driven by Nelson Piquet Jnr fell down the prototype order after an off track excursion led to a lengthy pit stop, the car returned to the action in tenth place.

The lead changes hands with Burt Frisselle in the #9 Action Express Racing car taking the lead with a fuel only stop.

Drama then started to unfold as the #02 Chip Ganassi Racing with Felix Sabates car returned to the pit just 2 laps after a routine stop, Jamie McMurray returning the car to the garage after a brief excursion. With fear that something may be damaged the car had suspension checked and some body work replaced.  The car was returned to the race after losing 9 laps in the pit, dropping the car to ninth place but with Joey Hand now at the wheel.

Yellow flag was put out halfway through the hour due to an engine issue with the #20 Dener Motorsports car. #9 Action Express Racing team took the opportunity to change tyres and driver under yellow and the lead was returned to #01 car of Juan Pablo Montoya.

The GT pack started it round of routine pit stops, after it had all shaken out the lead in the hands of Nick Longhi in the #69 AIM Autosport Team FXDD with Ferrari, closly followed by the #44 Magnus Racing in second and #23 Alex Job Racing in third.

The notable stop was the #30 MOMO/NGT Motorsport car, placing Sean Edwards in for his next stint and getting the car back on the lead lap.

The hour closed with a fantastic battle for second place in the prototype class, with Ryan Dalziel in the #2 Starworks with Alex Popow  car and Max Angelelli in the #10 VelocityWW, closely followed by the #02 car of Joey Hand desperately trying to claw back some time on the rest of the field after the laps lost in the pits.

The end of the hour saw the GT class being separated by just 15 seconds for the first 7 cars in class, being led by Andy Lally in the #44 Magnus Racing car. This looks like a battle going down to the wire and is well worth keeping an eye on.

In the GX category the #16 Napleton Racing Porsche continued its fantastic progress with Shane Lewis leading the class at the end of the hour by over 4 laps.