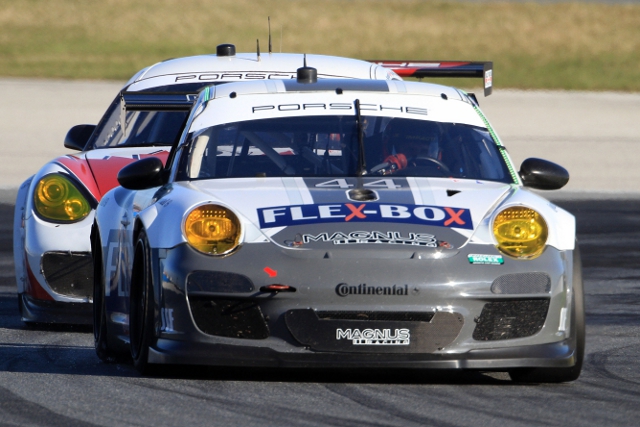 Weather continued to keep everybody waiting in the 17th hour of the Daytona 24 Hours, as Ryan Dalziel circulated slowly behind the safety car as the new leader for Starworks Motorsport.

As sunrise began to take place in Florida, fans and officials could barely tell as the thick layer of fog remained over the circuit, although as morning arrived the fog loosened late in the hour.

The lengthy delay lasted for the entire hour, in which drivers heading to the pits were the only source of position change.

Dalziel became the car at the front of the queue, with second place further down the line held by the #9 car of Mike Rockenfeller before he pitted to hand over to Joao Barbosa for Action Express Racing, moving the #01 Chip Ganassi Racing with Felix Sabates car to second ahead of the Spirit of Daytona Corvette.

The #60 Michael Shank Racing squad closed another lap to now lie eighth, three laps off the lead, while another Prototype to hit trouble recently was Rockenfeller’s team-mate, the #5 Action Express Racing Corvette now 22 laps down on the leaders as it returned to the circuit.

In the GT class it was the same story as several cars chose to visit the pits for fuel and tires, Markus Winkelhock shuffling to the front for Audi Sport Customer Racing ahead of Magnus Racing’s #44 Porsche – one of the few visible cars thanks to its luminous green roof lights.

It was business as usual for Napleton Racing meanwhile, as they continued to lead the GX class comfortably from Bullet Racing.