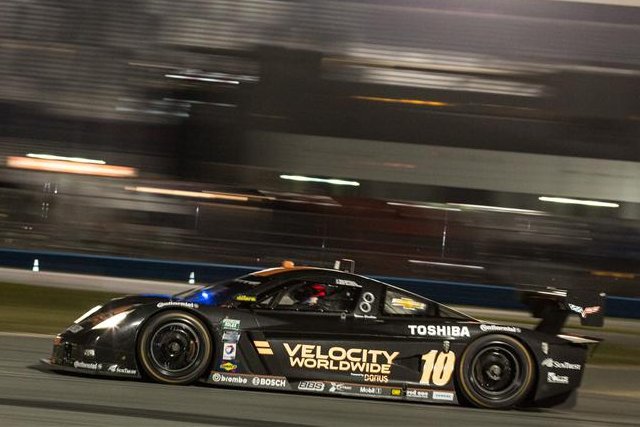 Max Angelelli felt Velocity Worldwide’s second place finish in the Rolex 24 at Daytona was like a victory considering the engine airflow restrictions imposed on the Corvettes prior to the race weekend. The no.10 Corvette Dallara DP, driven by Angelelli, Jordan Taylor and Ryan Hunter-Reay, finished second to the no.1 Chip Ganassi BMW after a late pit stop for fuel from the lead eight minutes from the chequered flag.

Given the restrictions imposed pre-race, Angelelli believed the fuel strategy in the closing stages was their best bet to take on the BMWs and was proud of the effort from the Wayne Taylor Racing squad.

“We did not have the power to compete fairly, so we thought a strategy to make it to the end of the race and beat them with fuel mileage was our only hope. So we took fuel and didn’t change tires on the last stop, even though I had many, many laps on my tires, and we were hoping just to make it like that with the strategy and get the win. But we didn’t have quite enough to do it. The 01 car is in another league. But, anyway, we are very happy with our Velocity Worldwide team, and our Corvette DP performed very well. I told everybody on the team I would never give up, and they know me. But look, this is the Velocity Worldwide team. They made an effort, not me. They made an effort with pit stops and strategy, and it was almost perfect. So, it’s kind of like a win for them.”

Jordan Taylor agreed that the Chip Ganassi BMWs, one of which retired with drivetrain issues, were too strong on outright pace but was pleased with the result and hopes to build on it in the rest of the Grand-Am Rolex Sports Car Series.

“I guess, when you get down to it, we were the best of the rest, you could say. Ganassi was somewhat in a class of its own. Our team did a great job. We didn’t have one mechanical problem the entire race. We never had to do anything in the garage. It was just fuel, tires, driver changes and that was it. Everyone executed the race. It was just unfortunate the way the cars were going that (second place) is where we ended up. You’ve got to be proud of everyone. Looking at the long run, we are in a championship here, so leaving here with second-place points is not a bad place to start the season.”

Hunter-Reay echoed the comments of Taylor regarding reliability, feeling the team put together a flawless 24 hours.

“It was an excellent job, an excellent team effort by everybody involved. Team Chevy, Wayne Taylor Racing – the preparation was second to none. We had a phenomenal race, really, when you look at how it all went. No mistakes, never went to the garage, never a hiccup, had great pace. We were struggling a little bit on some of the regulations with power. We had a little bit of a disadvantage there that we had to work against.”

Team Owner Wayne Taylor admitted he was desperate to take Team Chevy to the top step of the podium but accepted there was nothing more they could’ve done.

“Just representing Team Chevy, it’s such a big deal for me. When I think I have been in America for 22 years and, when I first came here, I drove for Jim Miller, who is now Pratt and Miller, our Corvette DP bodywork designer. My program manager when I was driving at that time was Mark Kent, who is now director of Chevrolet Racing. In 1991, when Jordan was born, we were racing at Lime Rock Park and Jim Miller said to me, ‘I’ll have a plane for you because Shelley (Taylor, wife) was pregnant with Jordan. And now, all this time later, he is in this car, with this team, with Mark Kent and everybody. I’m happy. I wanted to win so bad for Team Chevy, and so much for Velocity Worldwide and all our partners. I’m really happy. I’m relieved, I guess, you know. I was not prepared to not be the face of Team Chevy with my team. I know there are a lot of teams, but I wanted to be the one.”

“I’m really happy. Coming into the season, we’ve all been excited with this new partnership with Velocity Worldwide, and our partnership with Team Chevy, and I think Ryan Hunter-Reay, winning the championship last year and driving with me back in 2006, coming with us. Max, of course, is my family and part of everything we’ve done. And then Jordan coming on board this year, there was so much expectation. And there was so much drama coming into this race with horsepower and this and that. In the end, I felt that this team did more than anybody else. I don’t remember one pit stop that we didn’t beat everybody. And everybody just executed perfectly and we were just about there.”