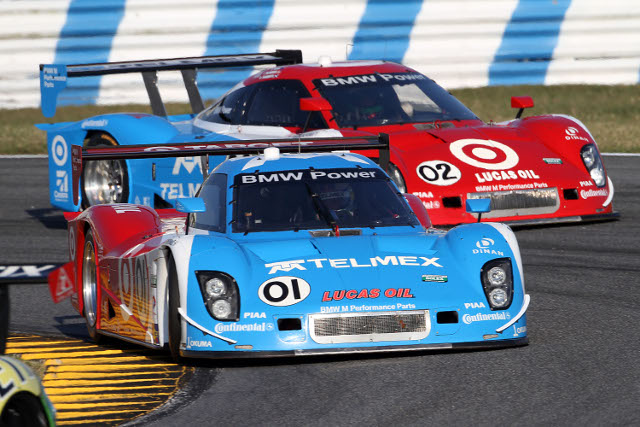 In a reverse of how they qualified yesterday afternoon Scott Dixon was fastest in final practice for the Rolex 24 at Daytona ahead of Chip Ganassi Racing with Felix Sabates teammate Scott Pruett, who returned the #01 to the upper echelons of the times after the team missed the full two night practice session last night.

Sebastien Bourdais was third fastest in the #2 Starworks Motorsport Ford-Riley with the two Action Express Racing Corvette DP in fourth and fifth, the #9 ahead of the #5. The Corvette Daytona Prototypes were closer to the pace of the Riley’s than in previous sessions, Alex Gurney briefly lead early in the session, though he and the GAINSCO/Bob Stallings Racing team ended the session just tenth fastest.

Nicolas Armindo led a Porsche 1-2 in GT for Magnus Racing with Spencer Pumpelly of Park Place Motosports. Toni Vilander reprised his performance of night qualifying in the #61 Ferrari 458, third fastest in class.

The three hour session was punctuated by a pair of stoppages and ended prematurely by a third. GT class Porsches were the cause of the first two, Kelly Collins spinning the #80 at the bus stop chicane before Burtin Racing’s #17 ran out of fuel.

The session was brought to a close when the #93 Turner Motorsports BMW crashed backwards into the tyre wall at turn five.