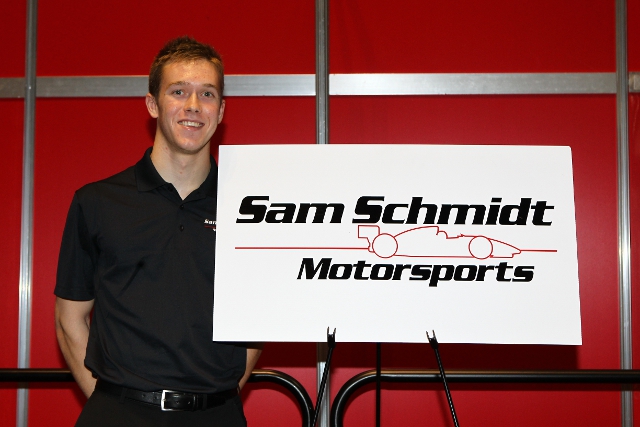 Over the past couple of seasons, Jack Hawksworth has established himself as one of the most exciting British prospects in single-seater racing, becoming a race-winner in Formula Renault 2.0 UK in 2011 before going on to become only the second Briton ever to win the Star Mazda Championship last season.

TheCheckeredFlag.co.uk recently caught up with the 21 year old to discuss his move to America, his title-winning Star Mazda season and his hopes for his upcoming campaign in Indy Lights.

On the eve of the 2012 season, following a successful maiden test stateside, Hawksworth made the big decision to continue his racing career across the pond in America, joining the Star Mazda Championship and putting himself on the ‘Road to Indy’ scholarship scheme.

“I decided together with my management that going to the USA to compete in the ‘Mazda Road to Indy’ was the best place for me to progress my career,” said Hawksworth. “IndyCar and American open-wheel racing in general is heading in a great direction right now, so when the chance to go and race out there came up, it wasn’t a difficult decision.

“The fantastic scholarship funding is a major attraction and something that is not emulated anywhere else in the world at the moment. The support Mazda is showing young drivers is fantastic, and it is enabling winners and champions to keep moving up the motor racing ladder where in normal circumstances – due to the high financial costs of the sport – they might not be able to proceed.”

His debut season stateside brought Hawksworth a number of new challenges including a new team in Team Pelfrey, a new car and a host of new circuits to learn, including racing on oval and street circuits for the first time.

The gamble certainly paid off for the Yorkshireman. A win on the opening weekend at St Petersburg set the tone for a sensational season, with seven more wins securing him the title with one weekend to spare, becoming the second Briton ever to win the championship.

As well as winning half the races he competed in, Hawksworth stunned his rivals with ten pole positions and eleven fastest laps in sixteen races, all new series records.

“There was a lot to learn, especially in terms of the ovals and street courses as I had never raced on those kinds of circuits before. Then again, it’s still four wheels and an engine, so it didn’t take too long to get up-to-speed.

“I prepared meticulously and the team did as well. We worked really well together and were able to get the most out of each other. This was the key to becoming champion, so although it was a difficult task, we left absolutely nothing to chance.”

Winning the title secured Hawksworth a $600,000 scholarship for the 2013 Firestone Indy Lights Championship, with Hawksworth making his move into the series with front-running squad Schmidt Peterson Motorsports.

Hawksworth Was On The Pace During His First Indy Lights Run

SPM have won six of the last nine Indy Lights titles, with Hawksworth hoping to continue that run after impressing during the first official test last week at Homestead.

“I’m fortunate enough to be in a great position again this season, working with a fantastic team in Schmidt Peterson Motorsports and in a fantastic championship. So far, things are going well and I don’t see why we can’t challenge for the title. The target, though, will be to prepare in the best way possible and get the most out of myself and the most out of the team so that we are the strongest package we can be. If we can do that, then the results will take care of themselves.”

If Hawksworth can go on and secure the Indy Lights title, the next stop for him would be to follow in the footsteps of fellow Brits like Justin Wilson, Mike Conway, Dario Franchitti and the late Dan Wheldon and compete in the IZOD Indycar series, though Hawksworth admits he’s not thinking about that just yet.

“For any young driver, to compete and win races and championships in IndyCar has to be right at the top of their wish list. As always in motorsport, though, things change at the speed of light and my ultimate goal is just to keep learning, developing and pushing myself and the people around me so that I can be the strongest competitor possible, regardless of the category in which I am racing, and just see what comes…”

By Robert Percy
1 Mins read
McLaren’s Formula 1, IndyCar and Extreme E teams and the McLaren Shadow eSports team will have their 2022 launches on the same day!
IndyCar

By Griffin Schmoyer
2 Mins read
A.J. Foyt Enterprises announces the signing of Tatiana Calderón to race a road and street course program for the team in 2022, the first woman to drive for the team in their history.