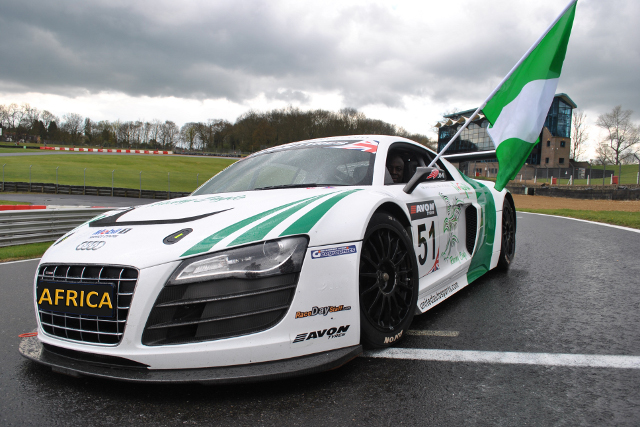 Having already welcomed the arrival several teams based in continental Europe the international flavour of this year’s Avon Tyres British GT Championship continues to strengthen with the announcement that an African team are to join the grid.

Team Nigeria Racing Eagle will race an Audi R8 LMS in the championship that starts on Easter Weekend at Oulton Park. With engineering help from established British GT team United Autosports the team, headed by Ribi Adeshokan, are already planning a mid-season move to the newer spec R8 LMS ultra.

“Our vision is to use the British GT platform to engage with people of an African origin who are emotionally attached to Africa and have a sense of belonging and pride in their country,” said Adeshokan. “We want to introduce these people to motorsport and show those them that there is more to the sport than Formula 1. Ultimately we want them to take pride in our team and support us like they would an African sportsperson at the Olympics.”

“We’re also working on bringing British GT to African television as week seek to attract corporate sponsors, including international brands with interest in Africa or those wanting to establish themselves further in Africa, helping them to promote and market their brands. We are hugely excited at the prospect of racing in British GT and are focusing all of our energy on making this year a success for Nigeria Racing Eagle and for the African people.”

The project began life intended for A1GP before that series folded. A change of focus to GT racing followed, based on several factors including the affinity for supercars among wealthy Africans.

The African contingent of the team continues beyond Nigerian Adeshokan to the drivers. Adrian Zaugg, a veteran of single-seater formulae including Formula Renault 3.5, GP2 and A1GP, where he secured a trio of wins for Team South Africa. More recently in sportscars Zaugg contested a handful of rounds of the Lamborghini Super Trofeo last season, taking a win in the final round at Navarra in Span.  Joining the 26-year-old will be 29-year-old Cameroonian Christian Ebong.

Ebong comes to British after a varied career racing in Europe including stints in the French Rallycross Championship claiming second place and then the title in his first two season. A switch to circuit racing has put him a Peugeot 207 Spider in the Le Mans Series supporting one-make series as well as in the German SEAT Supercopa series in support of DTM.

While in 2013 the team will run in partnership with United Autosports – who will also run their own Audi in the series – future plans are for an entirely African engineering squad to run the car.

Rebellion Run to Victory in a Race of Multiple Time Winners

Third Pole in a Row for Rebellion

Toyota Back on Top with Bahrain One-Two