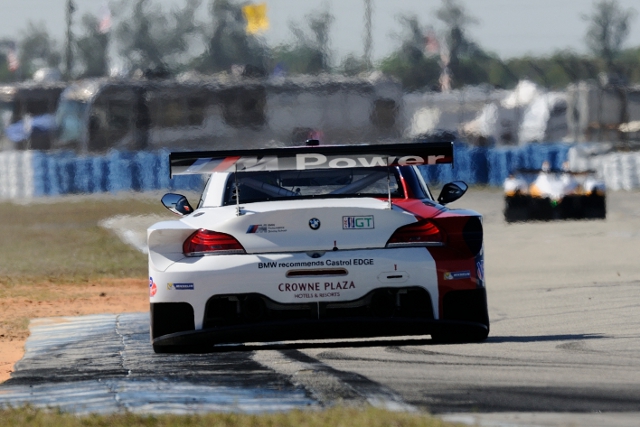 After putting themselves on a different pitstop sequence by declining the opportunity to under the DeltaWing derived caution Marcel Fassler led on the restart at  the start of the third hour of racing at the 12 Hours of Sebring.

Through the remainder of the hour the two Audi R18 e-tron quattro swapped the lead, McNish retaking the top spot in the #2 when Fassler made the inevitable pitstop twenty minutes into the hour.

However, McNish would give up the lead again when he was penalised for avoidable contact – race control naming a Corvette as the offended party in the incident while TV pictures showed McNish only in contact with Mirco Schultis in the #81 DragonSpeed Mishumotors PC entry.

Also in contact during the hour were Simon Pagenaud and Ed Brown from P2 rivals Level 5 Motorsports and Extreme Speed Motorsports. The pair made contact at turn one, Pagenaud searching down the inside for a way past only to send both cars spinning. Both were able to continue, though Brown made a pitstop at the end of the lap. His stint was later further complicated by a spin at turn four.

There were more problems for Corvette Racing, following the gear selection issues that had blighted the #3 from the opening. This time it was Richard Westbrook who brought the GT class leading #4 into the pits after seeing smoke coming from the dashboard. After a brief stop, and with Oliver Gavin now in the car it returned to the track, but without the benefit of a fully working dashboard, with gear indicator, shift lights and the speedometer not working, forcing another pitstop. They would end the hour down in ninth place, the class lead passing to BMW Team RLL and Joey Hand.

P2 was led at the of the hour by the sister #01 Extreme Speed Motorsports car of Scott Sharp. David Ostella was leading P2 for PR1 Mathiasen Motorsports with GTC headed by the #10 Dempsey/Del Piero Racing entry.