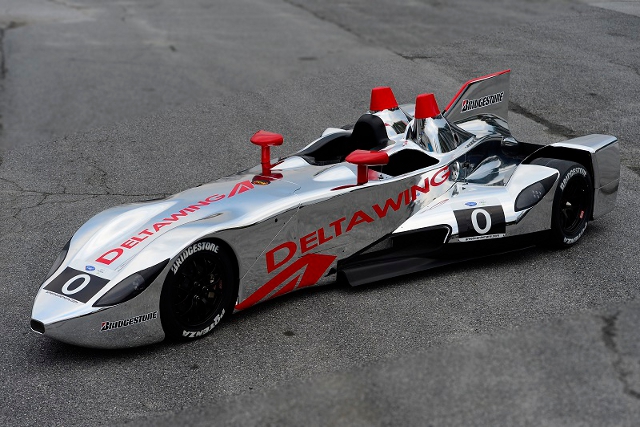 The DeltaWing powered by Elan will run in a chrome livery at the 12 Hours of Sebring later this month the team now running the revolutionary design have revealed.

The car ran in a mostly black colour scheme in its two race outings in 2012, but with a change in team to the new DeltaWing Racing Cars outfit managed by Dr. Don Panoz comes a change in the outward appearance of the machine.

The 2013 season also brings a new engine provider – in Panoz’s Elan concern – and a new tyre provider as Bridgestone replace Michelin in providing the unique tyres required by the unconventional layout of the DeltaWing. The introduction of the new tyre supplier had a bearing on the choice of colour scheme for the new season as Dr. Panoz explained;

“I think this became apparent once we would be using Bridgestone tires. The only colour they have outside of black is red. We wanted to keep it consistent. Before deciding on the chrome, I looked at brilliant reds or brilliant greens. We decided the chrome was the thing to keep it in line with Bridgestone and their colours.”

“It just ties into the DeltaWing being such a unique, revolutionary car. I wanted something that represented that image. A shining, aggressive metal was what I thought of, and that was the chrome.”

As previously announced the driving duties at Sebring will be shared by another two new names to the DeltaWing project in Olivier Pla and Andy Meyrick.

The competitive running for the 61st 12 Hours of Sebring begins on March 14 with qualifying the following day and the race on Saturday March 16.