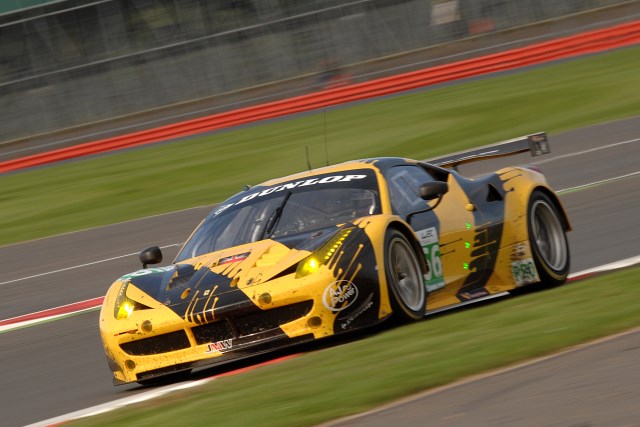 Dunlop have launched a competition in search of a livery for the JWM Motorsport run Dunlop Ferrari in celebration on the brand’s 125th anniversary.

2013 sees the fifth running of the competition, with liveries in the past incorporating the union flag, paint streaks and tread patterns. Entrants are encouraged to incorporate an anniversary logo in their 2013 entry to tie in with Dunlop’s 125th anniversary.

“I hope that somehow the designs reflect our progress and that our anniversary year brings us a special design at one of our flagship events.” said Director of European Marketing and Communications for Dunlop, James Bailey. “This is a great opportunity for unknown artists and designers to make a mark in history. It’s always exciting seeing the entries coming in and the great ideas that people of all ages across Europe can come up with. I’m hoping that, as 2013 is special to Dunlop, we can find a very special design to reflect that.”

Anyone over the age of 16 is eligible to enter the competition, with four entries from each country being put forward to the regional final. The winner will be partly chosen by Facebook users and partly by a panel of judges. The two most popular entries and two designs chosen by a jury from each participating nation will all receive prizes and go through to the European final, while the most popular entry will gain an automatic place in the final four.

The overall winner will get to see their car unveiled at the pre-race test weekend at Le Mans. They will also attend an awards dinner, have a behind the scenes tour at the test weekend, receive a pair of tickets to the race itself and 1000 Euros.

Entries can be submitted from 18th March via the Facebook page ‘Design the Drive’. The closing date for entries is 14th May, when voting will commence. The four winners from each country will be announced on 16th May, with the winner and runners up being notified on 20th May.

By Nick Golding
3 Mins read
Lotus have unveiled their brand-new Emira GT4 race car at the legendary Hethel test track, in what is a new era of GT racing for the famous manufacturer.
24 Hours of Le MansFIA WEC

Aitken, Falb and Flörsch line up for Algarve Pro Racing at 2022 24 Hours of Le Mans

By Vince Pettit
3 Mins read
Algarve Racing Pro head in to the 90th edition of the 24 hours of Le Mans with a strong lineup of Jack Aitken, John Falb, and Sophia Flörsch.
24 Hours of Le MansNASCAR

By Justin Nguyen
3 Mins read
Like in 1976, NASCAR will be represented at the 24 Hours of Le Mans in 2023. Hendrick Motorsports will field a Cup Series Chevrolet Camaro in the legendary endurance race as part of Garage 56.