Hornish Runs Away At Sam’s Town 300 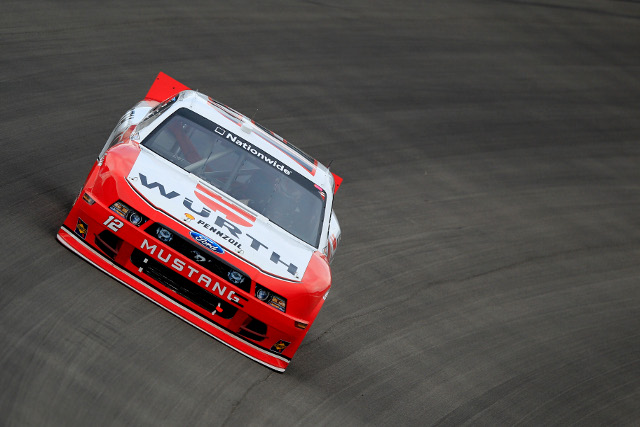 The win was Hornish’s second in the Nationwide Series, the first for Penske Racing in any NASCAR series at Las Vegas and also saw the first win for Penske since returning to running Fords.

Hornish led the majority of the race, with the #7 leading the pack for 114 of the 200 laps. Kyle Busch finished the race in second, 1.1 seconds back from Hornish, with Brian Vickers, Trevor Bayne and Elliot Sadler rounding out the top five.

“Man, the car was awesome today.” said Hornish. “It was a real joy to drive. I’ve got to thank all the guys on the Penske team for giving me an awesome car to race with. When you have a car that good, you’re always worried something bad is going to happen or you’ll get caught in somebody else’s problem. I’m glad that didn’t happen today. It’s great to get Penske Racing’s first win back in a Ford.”

“It was a tough race out there today all around,” added Busch. “Cars were really getting loose out there in the early stages of the race through the middle part of the race. The second-to-last run and the last run, I felt like our car was really good. There wasn’t much else that we could do to make it better. Sam was just that much faster than us. He was beating us a little bit everywhere, all the way around the race track. Certainly, when he stepped on the gas, that thing would go forward in a hurry. Us two were kind of the class of the field, but he was the class of everybody.”

Hornish had a three second lead over Busch before a spin for Scott Lagasse Jr brought out a caution on lap 182. The top seven cars opted not to pit before the green flag dropped again on lap 188.

The caution flag flew one lap later, however, as Kyle Larson, Joey Gase and Ryan Sieg were involved in a heavy accident leaving Larson’s car a smoking ruin. Larson, who was involved in a major accident at Daytona resulting in damage to the catch fencing surrounding the circuit, escaped the car quickly as safety workers arrived on scene.

By Justin Nguyen
2 Mins read
After Cody Ware scored a seventh-place finish in the team’s return to the Xfinity Series on Saturday, Rick Ware Racing will return at Martinsville ahead of a full 2021 slate in NASCAR’s second tier.
NASCAR Xfinity Series

Xfinity and Trucks gear up for Darlington weekend with throwbacks

By Justin Nguyen
8 Mins read
As part of the Southern 500 throwback weekend, many Xfinity and Truck teams will sport special liveries on their vehicles.