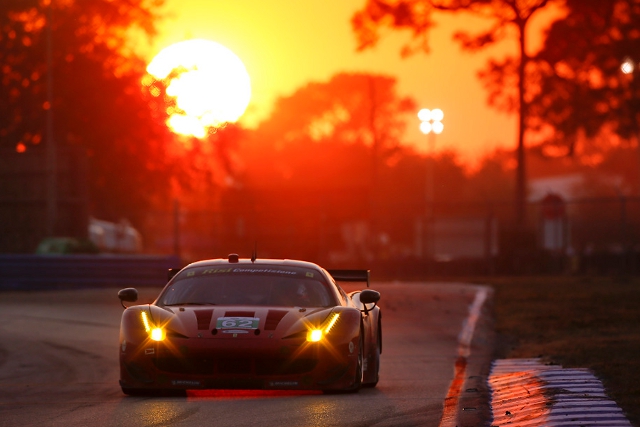 Risi Competizione led all but the final 15 minutes of the last four hours of the 12 Hours of Sebring as the Texas-based team finished second in the GT class on their return to the American Le Mans Series (ALMS) grid.

The team – with drivers Gianmaria Bruni, Olivier Beretta and Matteo Malucelli – were race long factors in the battle for the class lead, helped by avoiding the contact, penalties and reliability issues that took other teams – some albeit temporarily – out of contention for victory.

The only issue for the team struck late in the race as they were forced into a change of plan for the final stint of the race. Bruni was originally meant to complete the race for the team with a double stint but back pain and a loss of feeling his right leg forced him from the cockpit after a single stint with ALMS debutant Malucelli given the honour – and the challenge – of completing the race.

Malucelli exited the pits into the lead, but with an advantage being cut into by Corvette Racing’s Tommy Milner. Milner gained on the Ferrari man before a Malucelli mistake allowed him to slip through to the lead unchallenged.

“I don’t know if I made a mistake or if there was some gravel on the track but honestly they were too fast for me to stay in front,” said Malucelli. “It was quite hard, I just pushed and tried to do my best but sometimes it’s not enough. We finished second and the result is good points for the championship, a good start for me and Olivier; I’m sure we will win in the next few races.”

“I think today our rivals were very fast,” Bruni assessed. “It’s happened to me in the past with Ferrari – sometimes you’re so fast and you win and sometimes you’re fast and you don’t.  I think Corvette here was more prepared than us, but it’s a great result for Risi and Ferrari.  This team hasn’t raced for one year and they just finished second behind the 2012 Champions.  I think there’s great potential during the season for Matteo and Olivier to just get better and better!”

While Bruni will join the AF Corse in the FIA World Endurance Championship Beretta and Malucelli will continue Risi’s season in the ALMS, with their next race at Long Beach on April 20.