After running a pair of races in his first season as part of Audi Motorsport’s LMP1 programme British driver Oliver Jarvis prepares make his debut at the 12 Hours of Sebring next weekend.

In joining double 24 Hours of Le Mans champions Benoit Treluyer and Marcel Fassler for the March 16 race, Audi’s last before a change in regulations banishes LMP1 machinery from the event Jarvis enters a high pressure situation, though he sees it differently.

“There is always pressure in this job and especially this environment,” he concedes.  “In my mind I’m not concerned with the pressure I am seeing it more as an opportunity to show once again what I can deliver.”

Not only will it will be Jarvis’ first experience of racing at Sebring, but it will be his competitive outing in Audi’s hybrid R18 e-tron quattro LMP1 machines. However, after a successful start to the season in GT equipment in winning the Rolex 24 at Daytona it will be neither his first time driving at Sebring International Raceway, nor at the 12 Hours. He explained to theCheckeredFlag.co.uk;

“I was fortunate enough to watch the race last year, my first ever race in North America, and I stayed on for a few days testing afterwards. However my time in the car was very limited so I will have a lot to learn before the race.”

“The track itself is definitely one of the more difficult tracks I’ve driven with Turn 1 and the last corner especially challenging. I did, however, really enjoy the track. It’s already well known that it is especially bumpy so this adds an extra challenge in setting up the car and also driving it for 12 hours.”

In watching the race last year he also got the chance to sample the atmosphere at the track.

“I already have a good idea of what to expect from the fans as I was able to walk around and get a real sense of the atmosphere,” he said. “It’s an absolutely incredible atmosphere in the infield and there’s always something happening both on and off track. As for the racing I expect it to be a tough, challenging race where the ability to pass the slower traffic quickly, and importantly cleanly, could be key in the victory. As is the case with the majority of endurance races nowadays, it will be a 12 hour ‘sprint’ from green light to chequered flag.”

However, Jarvis’ past experience, both at the track and in the car, he admits, will only translate so far in preparing him for next weekend’s race.

“All of my testing has been on an ‘empty’ track so driving in ‘traffic’ could be completely different,” he said, adding that while he has found little difference between driving the e-tron quattro and the R18 ultra he raced at Spa-Francorchamps and in the 24 Hours of Le Mans last year so far there could still be unknowns to discover during the race week, which begins with testing sessions on Monday. 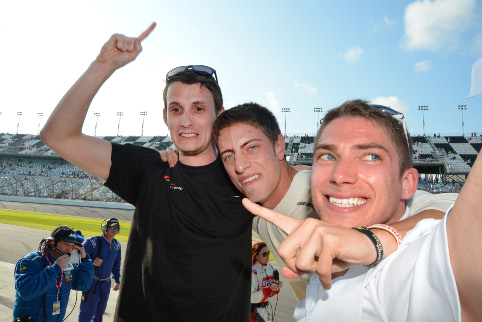 Jarvis (left) started his 2013 with a win in the GT class of the Rolex 24 at Daytona (Photo Credit: Audi Motorsport)

Jarvis, Treluyer and Fassler will drive one of two e-tron quattro hybrids in the race, the sister car in the hands of Lucas di Grassi, Tom Kristensen and Allan McNish. The two Audis will be making a guest appearance in the race, the opening round of the American Le Mans Series (ALMS), before returning to Europe to embark on a full season in the FIA World Endurance Championship (WEC).

The event – the 61st running of the 12 Hours of Sebring – will be the last to accommodate LMP1 cars such as the Audi, before it is subsumed into the new American sportscar series to be created by the merger of the American Le Mans Series and the Grand-Am Rolex Series. That fact gives this month’s race greater importance to Jarvis personally, but also to Audi.

As well as pair of Audis on the track the manufacturer will use its farewell appearance to showcase the fine recent history the brand has in the race with examples of all of the R18’s predecessors that raced (and often won) at Sebring on display around the circuit.

“It was important for Audi to say ‘good bye’ to the fans and to thank them for their support over the years,” said Jarvis. “Sebring has been an important part of Audi’s LMP1 programme, it began there is 1999.”

“It’s a privilege to be part of the Sebring line up especially taking into account that with the rule changes, this will be the last time that LMP1s will be able to run there,” he said. “It’s a great feeling to be partnering ‘Ben’ [Tréluyer] and Marcel [Fässler].”

Jarvis’ place in the teams comes as Lotterer begins a new season racing in the Japanese Super Formula series. In slotting into the team that has won at Le Mans Jarvis is obviously the junior member of the team, however, he explains, he feels not pressure in filling Lotterer shoes, preferring to see the race as an opportunity in one of the senior line-ups after running a limited WEC schedule last season.

“It’s definitely more difficult because you’re always compared to your team-mates and in this situation they will always have more ‘seat’ time and therefore more experience. But it’s important to be able to jump in the car and perform, which I feel I managed to do last year in finishing third at Spa and Le Mans.”

“I haven’t worked directly with either ‘Ben’ or Marcel,” he continued. “But as a team we always share all information, indeed with all cars and drivers, so I have been able to learn from everyone’s comments. Of course those who raced the car last year will have more experience. But as team-mates, they will be on hand to give me advice and increase my learning curve.”

Easing his learning curve in racing the hybrid machine could be big part of his Sebring weekend. Though Jarvis will race at Sebring with the same approach obvious intention of taking a victory that every racing driver enters a race with there is also the use of his Sebring experience in gathering knowledge for his WEC outings. Just as last season he is scheduled to run a truncated schedule, though this year he will be in a third e-tron quattro co-driving driving with Marc Gene and di Grassi, who will be making his own e-tron quattro debut on the other side of the garage at Sebring.

“Anything and everything we [he and di Grassi] learn in Sebring will naturally aid us at Spa and Le Mans but I think the greatest benefit to both of us will be the extra ‘seat’ time in racing conditions.”

Unfortunately, both men will have to wait until May, and the Six Hours of Spa-Francorchamps for their next opportunity to deliver.