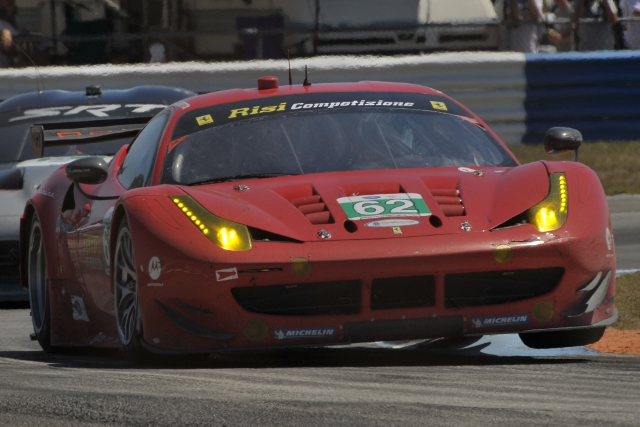 After strong return to the American Le Mans Series (ALMS) grid at the 12 Hours of Sebring Risi Competizione’s driver pairing of Olivier Beretta and Matteo Malucelli tackle a very different challenge for the second round of the championship.

After the Floridian airfield track of Sebring the series has jumped to the left coast of the US to the streets of Long Beach, California for this weekend’s two hour race.

Following the festivities of the week at Sebring the drivers’ primary concern is the lack of track time as the ALMS shares the weekend with the Indycar Series. The limited track time offers only a single two hour free practice session before qualifying with the team expecting much of time to be taken by Malucelli who will race on the street circuit for the first time this weekend.

The 28-year-old admits; “for me it will be difficult because I don’t know this track, but I’m playing with a simulator game just to know where the corners are before we start as we will not have so much time to run during the race weekend compared to Sebring.  Normally I don’t like street courses so much because they are really slow and tight, but I think in the USA street tracks are really popular and different compared to European ones, so I will be able to say more about that after a few laps!”

The close confines of the circuit are bound to catch out some of the teams and drivers – also newcomers to the circuit – with the resultant yellow and red flags cutting further into the tight ALMS schedule.

“With such limited track time, and on such a circuit as this, you have to work mostly on the direction and the braking as these are important to have confidence in the car,” assessed Beretta, twice a winner at Long Beach. “Without that, you can’t achieve as good a lap time.   Getting every corner right is vital for a good lap time here so we will be working hard to find a good set up for this.”

The team started the 2013 season with a second place at the 12 Hours of Sebring, banking the extra-large haul of points for the longer race. However, the celebration was tempered by the fact that they had only lost the lead in the final 15 minutes of the race.

“To come away with second place was very commendable,” said team principal, Giuseppe Risi, “especially as we lost out substantially to our competitors in terms of pit stop turnaround times because of an inequality in the Balance of Performance regulations.  That could have a big effect too at Long Beach where stops are critical because of the short track, short race and tight nature of the pits.”

“Of course we were disappointed not to win in GT at Sebring, after leading for so long and not putting a foot wrong in terms of how we ran the race.  But, after a short period of reflection, we were able to acknowledge what a good result it was for us as a team in terms of our 2013 Championship ambitions.”