Astons Contest Every Class For Home Blancpain Round 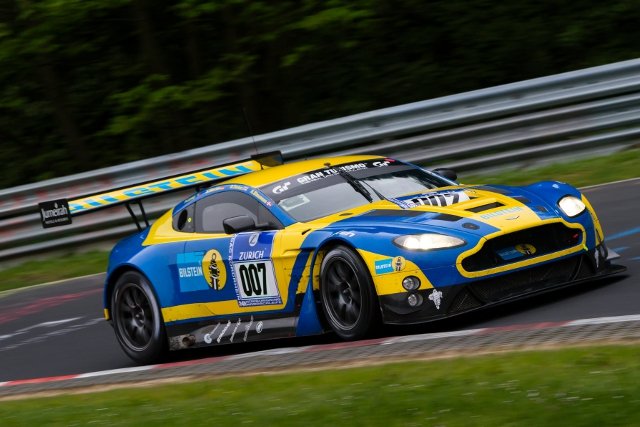 Four Aston Martin Vantage GT3 will ensure that the brand is represented in every class of this weekend’s Blancpain Endurance Series race at Silverstone.

The line-up for the manufacturer’s home round of the championship is led by the all Pro team of Darren Turner, Stefan Mucke and Fred Makowiecki who will drive the Bilstien sponsored Vantage GT3 that finished in the top ten overall of the Nurburgring 24 Hours earlier this month.

A team, including Turner and Mucke held the overall lead on the fearsome Nordschleife before a red flag interrupted proceedings during the night. While the trio – all part of Aston’s FIA World Endurance Championship team – will contest the premier class of the championship there will be a further three cars in the hands of customer teams.

“The Blancpain Endurance Series is highly competitive, with many strong team and driver line-ups,” said Aston Martin Racing team principal John Gaw. “We are, of course, entering with the aim of finishing as high as possible, if not at the front in each of the classes, at our home event.”

“The factory Vantage GT3 performed faultlessly at the Nürburgring 24 Hours and we appreciate the ongoing support from our partners including Bilstein and Immun’age to enable us to enter this additional car in the Pro class where we have no customers racing at this round.”

“Bringing the WEC drivers to support both our customer and our reserve drivers seems a smart thing to do as we will be able to share any lessons as well as sharpen the focus of the factory team and drivers just before we head to Le Mans, one of the most important races of the year.”

Both Beechdean AMR and Barwell Motorsport will race in the Pro-Am class. Just as at Monza at the start of the season the Beechdean car will be driven by team owner Andrew Howard, Daniel McKenzie and Jonny Adam, the Scot recently signed to Aston Martin’s works roster. The Barwell car will be driven by British GT Championship regulars Mark Poole and Richard Abra, with Joe Osborne drafted in to complete the team.

Fellow British GT team PGR–Kinfaun AMR complete the Aston Martin squadron for the race, racing in the Gentlemen’s Cup class of the race.