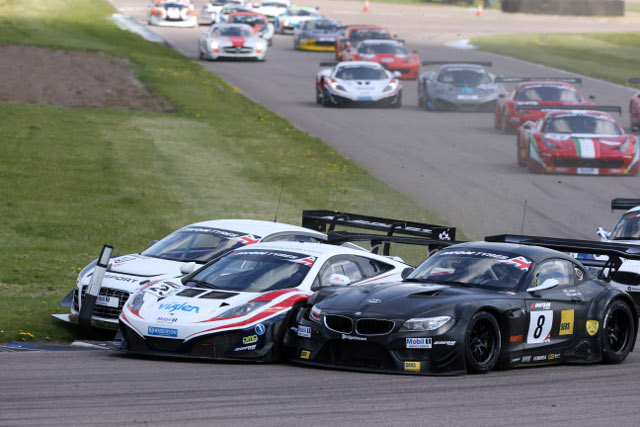 The largest grid ever for the Avon Tyres British GT Championship will take to the Silverstone Grand Prix track this weekend for the three hour Silverstone 500 race.

Nearly 50 cars are expected for the race, the third weekend of the 2013 season and the longest race of the year. The already large British GT grid is boosted by several new entries, including eight new GT4 cars for the race that forms the opening race of the new Avon Tyres GT4 Trophy. The GT4 grid is added to further by Blendini Moto, who add a Ginetta G50 in the class for Rory Bryant and Anthony Rodger who have signed on for the remainder of the season adding further depth to the already competitive class.

After winning both the races on the opening weekend Century Motorsport’s Declan Jones and Zoe Wenham protected their points lead last time out at Rockingham despite losing out on the race win to Complete Racing’s Aston Martin Vantage GT4.

There are also additions in the premier GT3 class.

As well as the one-off entry from Prospeed Competition for American driver pairing Charles Espenlaub and Charles Putnam there are extra entries from both AF Corse and FF Corse.

The later, the English based team, expand the team to three cars for the weekend. As well as the GT3 Ferrari 458 for Gary Eastwood and Rob Barff they also enter a GTC variant of the car for Jacques Duyver and Charlie Hollings with former GT4 champion Jamie Stanley and Paul McNeilly in a Ferrari 430 GT3, the lone entry in the GT3B class.

Series stalwarts Matt Griffin and Duncan Cameron jump from MTECH to AF Corse for the rest of the season as the top team bring three current spec GT3 cars to the race. Regular 2013 drivers Aaron Scott and John Dhillon remain, with Michele Rugolo and Steve Wyatt driving a third 458 GT3 for the team.

In place of Griffin and Cameron at MTECH, the combination for Phil Burton and Adam Wilcox return to the championship for a one-off appearance.