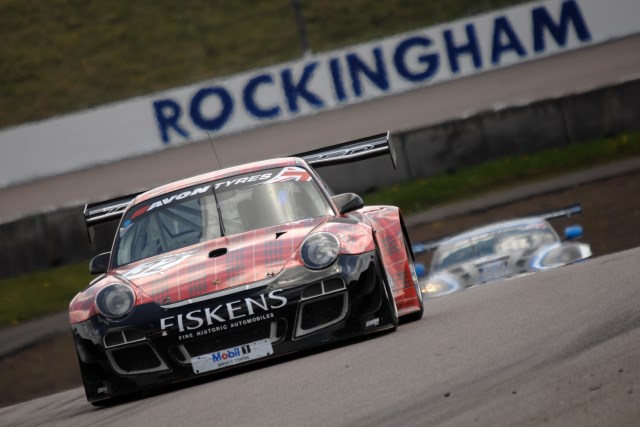 Two teams that had suffered on the opening weekend of the season bounced back, taking full advantage of the extra points on offer from the two hour Avon Tyres British GT Championship race at Rockingham.

As the Trackspeed domination of the practice and qualifying sessions fell away in the heat of the race as mechanical problems knocked out both Oulton Park race winner. That left the team’s remaining representative – the Gregor Fisken and Richard Westbrook driven #32 that failed to score a point at Oulton – to take the race win.

Westbrook pounced to take the lead after the race’s second safety car period. Rick Parfitt Jr. stopped the then GT4 leading Optimum Motorsport Ginetta G50 at Tarzan, though officialdom waited until the mandatory pitstops had all been completed to throw the yellow flags around the Rockingham track. The race restarted with 47 minutes remaining but Westbrook needed only two corners before he passed the Trackspeed #33 Phil Keen at Deene.

The pass was the beginning of a slip down the order for Keen plagued by a broken throttle body that slowed him on acceleration. As the problem grew worse, Keen slow away from several corners on the infield, Keen slipped back behind Warren Hughes and Jonny Adam in the same lap, promoting the M-Sport Racing and Beechdean drivers to second and third respectively. Keen’s race lasted only a few more laps before the problem reached the critical point.

Their retirement reduced the number of Trackspeed Porsches to one, the #31 of points leaders Nick Tandy and David Ashburn already having pulled out of the race to end their own troubled race.

The three Trackspeed cars had started 1-2-3 and held those positions, though in a different order to qualifying, until John Gaw passed Ashburn for third. While Jon Minshaw and Fisken broke away a pack had started to develop behind Ashburn that provided the main drama of the first half of the race. One way or another the group shrank gradually.

Gaw, Oli Webb and Mark Patterson all got past Ashburn while Mark Poole and Jay Palmer both spun back away from the group, Palmer running off track twice in a the pace of a few laps, the second one ending the race for the Vita4One Team Italy squad in the gravel on the exit of Gracelands.

It was while yellow flags still protected the sweeping left hander that Marco Attard tried to make his own exit from the Ashburn group but instead tapped the Porsche driver into a spin at Gracelands – a move that was to see he and Olly Bryant’s Ecurie Ecosse #79 excluded from the results.

Ahead Minshaw had been pulled back by Fisken and Gaw, the latter pair ending their stint battling over second place.

Minshaw and Fisken pitted together, early in the twenty minute pit window while Gaw and Webb continued one, waiting until the start of the second hour to hand over to Phil Dryburgh and Danny Candia.

Gaw pitted first, leaving the lead to Webb for a single lap before he too pitted to hand over the #15 Mercedes SLS. Despite their strong opening stints both men would see their efforts unrewarded in the final results. Dryburgh would have to serve a penalty for under taking under the safety car for PGR–Kinfaun while Candia was taken out by Jody Firth in the United Autosports McLaren started by Mark Blundell. Like the Ecurie Ecosse pairing Firth and Blundell would find themselves excluded from the results for their role in the accident.

Fisken’s pitstop to hand over to Westbrook had, to the drivers, seemed longer than their rivals but once out on track Westbrook reeled off a succession of fastest laps leaving him right on Keen’s tail when the safety car emerged for the second time for the stranded Ginetta after Zak Brown’s lap one demise in the #23 United Autosports McLaren had prompted the first appearance.

Westbrook pulled away, his lead cresting at just over 20 seconds before he started to manage the tyres on the Porsche allowing Warren Hughes to pull back a small portion of the lead before the checkered flag. The win propelled Westbrook and Fisken into third place in the points. Despite their retirement Tandy and Ashburn hold onto the points lead, with United Autosports Audi drivers Matt Bell and Mark Patterson in second after they inherited third place after a post-race penalty for Andrew Howard knocked the Beechdean Aston down to seventh.

The penalty meant there were two Audis on the podium with Hughes and Rembert Berg’s M-Sport Racing example showing it’s true pace after an Oulton Park meeting crippled by gearbox problems for the 2013-spec R8 LMS ultra.

Benji Hetherington stands alone fourth in the points after he and Jason Minshaw combined to take fourth place in their first race together for Fortec Motorsport. Minshaw’s opening stint began uncertainly, pitting under the early safety car after being forced off by a spinning – the rejoining – Ahmad Al Harthy in the Oman Air Motorbase Porsche.

Despite the spin – and subsequent penalty for the rejoining that sent Minshaw and the GT4 pack scattering – and a late race pit stop for a pair of new rear tyres Al Harthy and Michael Caine finished sixth behind FF Corse men Gary Eastwood and Rob Barff. Behind the penalised Beechdean Aston the lone MTECH Ferrari in the race (Derek Johnston and Jake Rattenbury) finished eighth with British GT debutants Von Ryan Racing and Balfe Motorsport completing the top ten.

In GT4 Steve Chaplin and Tom Wilson overcame the numerical superiority of the Ginetta to claim victory for Complete Racing in the Aston Martin Vantage. Taking the second hour of the race Chaplin enjoyed a healthy lead throughout his stint, though he was unaware of his minute-plus advantage leading to a lurid spin at Deene that ‘only’ knocked 20 seconds from his lead en route to becoming another team to bounce back from a pointless Oulton Park in the first of the longer races on the calendar.

Wilson had taken the lead when Parfitt stopped from the lead. Courtesy of second place in class Zoe Wenham and Declan Jones maintained their championship lead for Century Motorsport while Dan Eagling and Matt Smith banked their first points with Redgate/Lifetime Racing by completing the podium places in class.