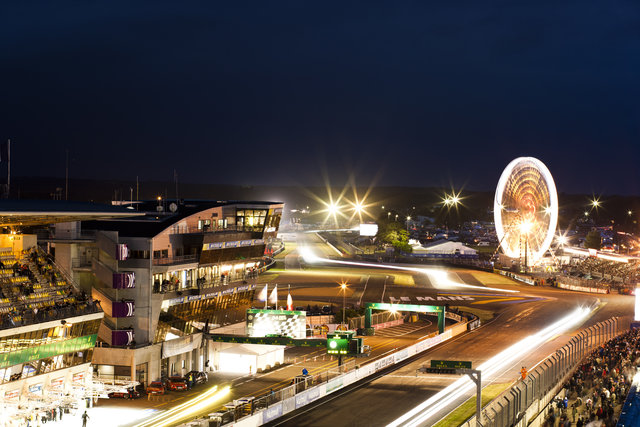 As the Le Mans 24 Hours moved in to Sunday, the race found itself under yet another safety car period, this time for a spinning car, spreading a lot of gravel across the circuit.

As the race went back to green flag racing, the #8 Toyota found itself in one of the worst positions, stuck in a group of GT cars going through the chicanes down the Mulsanne Straight, holding up the 2nd place car, currently a lap off the race leading #2 Audi.

The LMP2 standings were about as mobile as the LMP1 standings throughout the tenth hour, with very few on-track position changes and most of the action happening on pit road. G-Drive Racing by Delta ADR continued to lead from the Oak Racing and Greaves Motorsport machines.

As had been the case in the earlier hours, the GTE classes provided some fantastic racing and battles up and down the order. The top end of GTE Pro giving some close racing between the #97 Aston Martin and the #92 Porsche, with positions swapping a few times throughout the hour.

There was also a change in the lead in the GTE Am category, with the #88 car throwing itself out of the top spot at the exit of the Esses, allowing Patrick Dempsey to head to the top of the standings, to the delight of the many fans of the Grey’s Anatomy actor.

A message from race control in the latter stages of the hour caused a little worry for some drivers, with a warning of oil in the entry to the Porsche Curves, although no-one was caught out by the spillage.