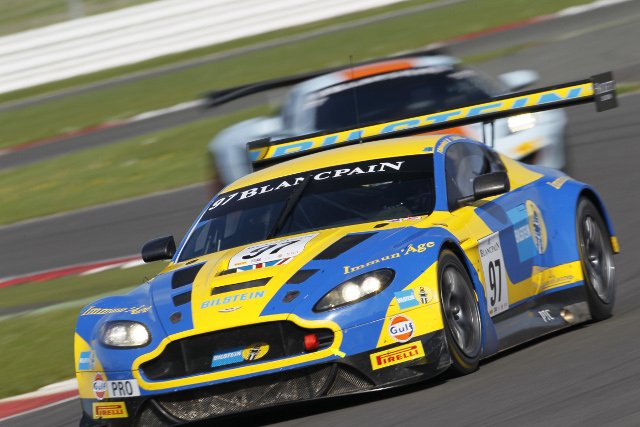 Home teams dominated the qualifying for the Blancpain Endurance Series race at Silverstone with British teams taking both spots on the front row of the grid and pole position in all three classes of the race.

Two of the three class poles went to Aston Martin Racing teams. Less than a month after narrowly missing out on pole position at the Nurburgring 24 Hours the Bilstein liveried Aston Martin Vantage GT3 will start on pole for this afternoon’s race after Fred Makowiecki lapped the Northamptonshire Grand Prix circuit in 2:01.140.

The Frenchman’s lap came in the second of the three 15 minute segments of qualifying with co-drivers Darren Turner and Stefan Mucke piloting the machine for the first and third segments respectively, Mucke second fastest overall his part of the session.

He lost out on the top spot in the final session to Alex Buncumbe, who secured Pro-Am pole, and second on the grid overall in the RJN Motorsport Nissan GT-R GT3 he shares with Nissan Playstation GT Academy graduates Lucas Ordonez and Peter Pyzera, Pyzera one of four men to win the latest European competitions.

“I am delighted to be second on the grid and P1 in the PRO AM category,” said Buncombe. “The team did a fantastic job on the car, my engineer found the set ups and they seem to work fine. The car is different than at Monza so we need to get used too the car but I managed to do one really good lap in the end. We have a long race this afternoon we know that everything can happen but we will try to do a good pit stop and see how it goes.”

Buncombe’s lap was – at 2:01.186 – just four hundreths slower than the overall pole time but close to four tenths faster than the next best time in the class, set by Franck Perera in the Pro GT by Almeras Porsche. Second and third in the Pro category were taken by Frank Stippler and Alessandro Pier Guidi for Belgian Audi Club WRT and SMP Racing.

Aston Martin Racing team principal John Gaw was the fastest man in the Gentlemen’s Trophy with a best time of 2:02.824 in Vantage GT3 he shares with regular British GT co-driver Phil Dryburgh.

“Alex and Nissan spoiled the party, I was a bit angry! “joked Gaw. “We tried to be the fastest in each category but we could not in PRO AM. We were in Silverstone last weekend so we are a bit advantaged and that is great because the Aston Martin suits the circuit. I think Blancpain Endurance Series is one of the most important international championships and I mean almost 60 cars on the grid is fantastic, all GT3 cars of course, with some fantastic teams and drivers line-ups. It is also terrific to see such a beautiful weather in Silverstone for a change, so I think this is going to be a terrific race.”