Changing conditions at Snetterton brought about a breathless pair of qualifying sessions to decide the grids for the two Avon Tyres British GT Championship race this weekend.

Both sessions took place on a wet track but with the track conditions improving with every lap late efforts shaped the look of both grids. In the first session – largely given over to the less experienced drivers of the pairings – it took until the final five minutes of running to push Jon Minshaw from the top spot.

Minshaw, in the #33 Trackspeed Porsche took provisional pole with his first flaying lap and was able to keep the advantage until Trackspeed stablemate Gregor Fisken moved ahead with a lap of 2:06.821. Fisken’s time at the top was short lived, Andrew Howard pushing him aside less than 30 seconds later to put the Beechdean Aston atop the times before M-Sport driver Rembert Berg and Steve Tandy moved ahead, Berg holding pole for only a few seconds as the grid was reshaped nearly every time a lap of the three mile circuit was completed.

With a time of 2:05.866 Berg would go back to the pole spot – this time for good – after the checkered flag brought the session to an end. He was followed in improving late one by Howard who made sure of fourth in the Beechdean V8 Vantage, with the similar Barwell Motorsport Aston placed on the other side of the second row by Mark Poole.

Despite not improving Steve Tandy kept second in the #888 888Optimum BMW Z4 GT3, a performance that would be replicated by co-driver Dan Brown in the second session. 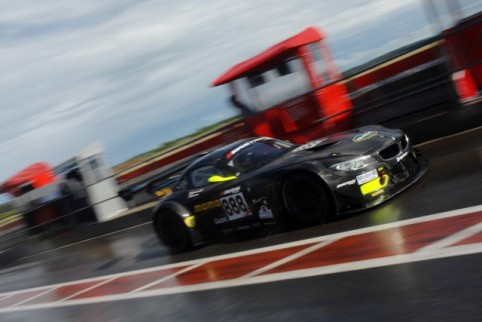 “We’re delighted to both have second place but we both wanted to have pole,” Brown said of the session for he and his co-driver. “Before now the best we’d had was a seventh at Silverstone and Steve’s best had not been great so he knew there was a bit of pressure on to qualifying well here because it’s hard to overtake it’s quite a tight track.”

“I went out and couldn’t see a thing,” he added moving onto his own session behind the wheel. “I hit a puddle and nearly lost it. I radioed in ‘we’ve got a lot of aquaplaning’ and they told me ‘everyone has, just deal with it’ so I thought I just needed to man up . All through the session I wasn’t very quick, I was really struggling and on the last lap I backed off and gave myself some room, got a bit of visibility and just got a lap together.”

Behind the Aston Martin second row Gary Eastwood claimed the position as the best of the Ferraris in fifth for FF Corse ahead of three Porsches, Minshaw having got back ahead of Fisken with Ahmad Al Harthy eighth. In the lone Fortec Motorsports Mercedes SLS present this weekend Jason Minshaw was ninth quickest, having held second at one point as the Minshaw family briefly held both front row spots. Lee Mowle, in the sister 888Optimum BMW to Tandy and Brown’s completed the top ten.

After Zak Brown had crashed out of the session in United Autosports’ #23 McLaren there was a lengthy delay before the start of the second session, allowing the water to retake any dry line that had been carved through the standing water producing what Stephen Jelley described as a “mirror finish” across the surface.

Once again then every lap proved crucial as Jelley and Trackspeed teammate Nick Tandy drove the times down through the session.

Tandy’s improvements in the #31 Porsche he shares with David Ashburn (who ended the first session just 14th) ended at 2:05.603 as Jelley pushed forward going faster by nearly a second on 2:04.526. With that lap pole for the second of Sunday’s 60 minute races was decided but the positions immediately behind remained open.

Into the gap Jelley had created between the two Trackspeed cars moved Brown, his 888Optimum teammates Joe Osborne and United Autosports’ Matt Bell. Rob Barff reprised the pace of the FF Corse Ferrari to join the Tandy/Ashburn Porsche on the third row. Michael Caine qualified seventh in the Motorbase Porsche – another team to take top ten spots from both sessions.

“It was a controlled aggression in the last few laps because everyone knew the last lap was going to be quickest you just had to throw everything at it,” Jelley told theCheckeredFlag.co.uk. “Because there was a bit of a break before the session the water completely took over any dry line the cars before had made so the track had a mirror finish to start the session and the there was a lot of moving around on standing water. As the cars started getting round you could feel a bit of a line a little bit more then it became quite important to keep the car nice and balanced on the more hazy part of the race track rather than slipping off back onto the mirror finish bit that would send you off into the weeds.”

The Aston Martins of PGF–Kinfaun and Beechdean were eighth and ninth fastest after late improvements from John Gaw and Jonny Adam respectively with championship leaders Olly Bryant and Marco Attard starting from tenth through Bryant after Attard had only been able to take 20th from his part of the session.

GT4 spoils were shared between Steve Chaplin and Dan Eagling.

Chaplin was one and a half second faster than Rick Parfitt Jr. to comprehensively take pole for tomorrow’s first race (scheduled for 10:45am) in his Complete Racing Aston Martin. Eagling, in Redgate/Lifetime Racing’s Ginetta G50 added pole for the second race (due off at 3pm) – by a much thinner margin – to his class winning performance at Rockingham

He was less than a tenth faster than Declan Jones, charged with driving duties in the Century Motorsport Ginetta G50 he shares with Zoe Wenham. The points leaders, whose advantage was cut after problems at Silverstone, will start the first race from fourth in class.

theCheckeredFlag.co.uk will have full coverage of the two British GT races, including line blog coverage of both events.

Brown Believes Sainz can Give Leclerc ‘A Run for His Money’ at...

Budget Cap in Formula 1 Will be a “Massive and Painful” Task...