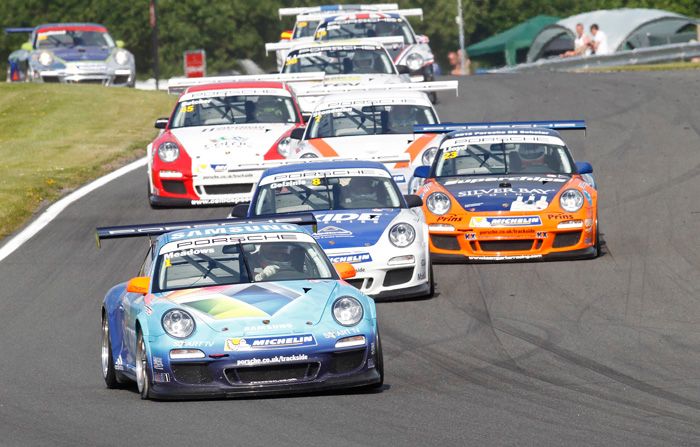 Defending champion Michael Meadows claimed a lights to flag victory in round seven of the Porsche Carrera Cup GB at Oulton Park to take the championship lead after a puncture for pre-race points leader Jonas Gelzinis meant he could only finish ninth.

As the lights went out, Meadows made a good start to lead the pack into the first corner, Old Hall. Behind, fellow front row starter Gelzinis did just enough to keep the fast starting Dan Lloyd at bay and maintain second place.

Further back, Dean Stoneman got the jump on Rory Butcher to move into fourth but Butcher fought back later on in the lap with a brilliant move, scything down the inside at Hislop’s.

On lap four, just as Gelzinis was beginning to reel Meadows back in after an early break from the Samsung Smart Motorsport driver, the Lithuanian went off at Cascades after suffering a front puncture. The Juta Racing driver recovered back on to the circuit and crawled back to the pits to replace the tyre, which dropped him a lap down.

A lap later there was more drama, as contact between Stoneman and Butcher resulted in the latter spinning to the back of the field.

At the front, after Meadows’ initial burst away from the field, Lloyd began to close the gap and kept him honest but was unable to get close enough make a move. At the flag, the pair were separated by just  0.8 seconds.

“It’s difficult when you’re leading because it’s so easy, like we’ve seen this weekend, people running on at the hairpin and at the chicane, there’s no need for me to push on too much and it gives the guys behind a reference point to break and they’re chasing , it’s easier to chase we all know it is. I was happy to keep a  1.5, 2 second lead and never let it get much more or much less than that.”

Lloyd said: “I’m really pleased. Obviously it’s great to make up a position it’s hard to overtake round here so it’s great to get in front of Gelzinis.

To start with I just thought try and keep with him (Meadows) as much as you can and then it became apparent that we had quite good pace. At the end I just tried to bat him down but the only way anything could have happened was if he made a mistake which obviously didn’t happen so yeah I’m happy with second.”

Stoneman finished third on the road but was later handed a twenty second penalty for the contact with Butcher. This promoted Pro-Am1 victor Karl Leonard to an overall podium finishing position.

Butcher recovered to fifth on the road after the incident which then became fourth when Stoneman was given his penalty.

Victor Jiminez was sixth overall and second in Pro-Am1 with Dan De Zille completing the Pro-Am1 podium after finishing seventh.

Pete Smallwood was eighth and won Pro-Am2 with Gelzinis the last driver to make the flag following his puncture.

Carrera Cup GB debutant James Birch’s race ended almost before it had even begun as a gearbox problem saw him retire at the end of the first lap.

Freelance sports journalist with an immense passion for motorsport. I will be focusing on the BTCC this season and I look forward to bringing the latest news, analysis and features from the paddock.
Articles

By Vince Pettit
1 Mins read
Both Richardson Racing and Will Martin are in the hunt for more victories after taking their maiden win together last year at Thruxton.
Endurance RacingFIA WECNurburgring 24 HoursNürburgring Endurance SeriesPorsche Series