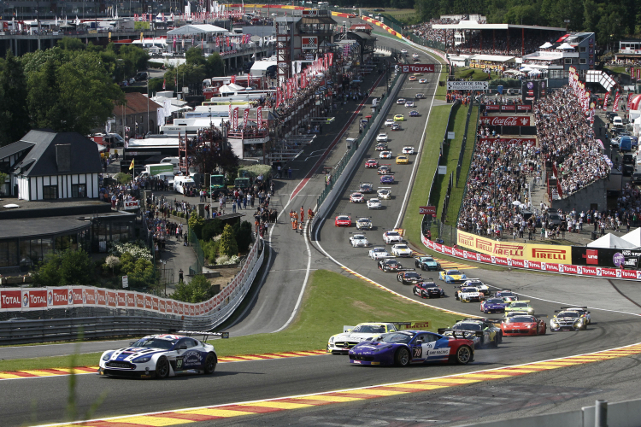 The 2013 Total 24 Hours of Spa got off to a dramatic start in the Belgian sun.

The race started infront of the old pits with front row drivers Stefan Mucke and Alessandro Pier Guidi ran down the hill towards Eau Rouge side by side. Pier Guidi had the inside of the left hand kink to start the ascent but the outside for the bulk of the climb.

Trying to hold on around the longer line the Italian span the SMP Racing Ferrari across the track at Radillion. Somehow no one in the pack hit the errant car, though several were forced into evasive action.

The spin allowed Mucke briefly into an unchallenged lead, though Nicky Catsburg in the Pro Cup class leading #4 Marc VDS Racing was soon filling the mirrors of the Aston Martin. Alvaro Parente – who started in tenth had climbed through a chaos into third with Maxime Martin in another of the VDS BMW Z4 in fourth – through he was overhauled by Maximilian Gotz in the first half hour.

Gotx gave up the position when he pitted under a the first safety car of the race that was called out when Alex Buncombe suffered catastrophic left-rear suspension failure on his Nissan GT Academy Team RJN car. The wheel folded beneath the Briton as he climbed Eau Rouge, picthing him into the tyres on the outside of the corner.

As well as Gotz, Matt Griffin and Marco Cioci also pitted in their Pro-AM Cup AF Corse Ferraris. All three fell from the overall top ten, though they were beginning to make their way back up the order as teams made scheduled stops at the end of the first hour.

Mucke was one to pit before the end of the hour, giving Nicky Catsburg the lead he had pushed for with increasing force following the safety car. Twice Catsburg tried to take the lead around the outside at Les Combes and twice Mucke’s defended, forcing the BMW onto the run off. One the second occasion Catsburg was able to take the lead, but had to give the position back after bumping across the inside of the second element of the corner.

Catsburg led at the end of the hour – though he was leading a train of cars into the pits at the time.

2013 Total 24 Hours of Spa class standings after one hour: