When Century Motorsport partnership Declan Jones and Zoe Wenham took both of the wins on offer from the Oulton Park weekend there was just the inkling that 2013 would see a runaway leader in GT4 just did the year before.

The 50 point haul from the two 60-minute races certainly put Jones and Wenham in a promising position atop the points standings and a podium at the following round at Rockingham only extended their lead.

Having finished second in both Oulton Park races Ryan Ratcliffe and Rick Parfitt Jr were leading at Rockingham for Optimum Motorsport. However, under uncertain circumstances, Parfitt Jr coasted to halt on the outside of the Tarzan hairpin and into retirement leaving the race win to Steve Chaplin and Tom Wilson in their Aston Martin Vantage – the only non-Ginetta in the class on the day.

The Complete Racing co-drivers had failed to score at Oulton Park, a problem forcing them from the first race and leaving them unable to take the start of the second race. However, the extra points for the longer race spring boarded them towards the third place in points they currently hold.

After the Ginetta G50 park – entries from APO Sport and Redgate/Lifetime Racing completing the regular line-up in the series – failed to take advantage of their numerical advantage at Rockingham they faced a greater and more varied opposition at Silverstone as teams competing in the Avon Tyres GT4 Trophy helped boost the British GT grid to record size.

By and large the European opponents had the upper hand, though new entries British series Blendini Moto climbed up to the lofty heights of third overall by delaying the first of their three pitstops until nearing the halfway point of the race. The battle for the class win was between two Dutch entered cars.

The Pro Sport Competition Porsche of Adam Christodoulou and Joerg Viebahn appeared practically tied together with the Ekris BMW shared by Ricardo van der Ende and Bernhard van Oranje. The BMW remained behind throughout the battle, which spanned pitstops to complete a final driver change. At the end of the race just three tenths of a second separated the pair, though a post race 30 second penalty would inflate the gap back to the BMW, which only held onto third place by two seconds over Optimum’s Ginetta G50. 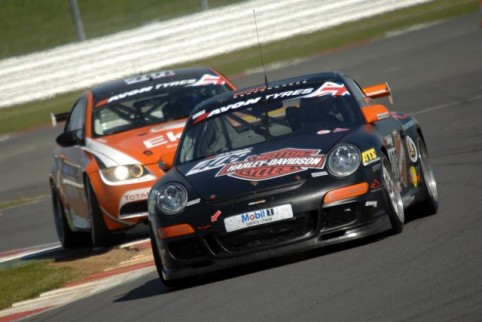 Though the foreign teams still claimed British GT points, the points Parfitt Jr and Ratcliffe took for third were a welcome boost. Fellow British teams finished fifth, sixth and seventh in class but a mechanical problem that left Zoe Wenham –briefly – by the side of the track meant that she and Jones could only finish tenth in class.

Having moved into range with the Silverstone result the Optimum duo made their strike.

The pair claimed their first class win with a straight-forward victory in the opening race of the week having led throughout the 60 minute race, but they needed a clean sweep to take the class points lead to start the summer break.

They did exactly that, but with a drive through the class that was the on track equivalent of what they were doing in the points’ standings.

Early in the race the car ground to halt on the infield of the circuit, Ratcliffe losing 40 seconds to the rest of the class as Declan Jones and Redgate/Lifetime Racing’s Dan Eagling led through the first half of the race, Matt Smith taking over the lead in the car started by Eagling after Zoe Wenham was forced to pit to repair the front bodywork on the Century car damaged in contact with one of the GT3 cars.

Then came Rick Parfitt Jr. He passed the Complete Racing Aston Martin just after the mid-race pitstops, then began the task of chasing down Smith and James May in the APO Sport car.

With May faster than Smith and Parfitt Jr faster than both a dramatic climax approached. Both May and Parfitt Jr passed Smith on the same lap, the Parfitt Jr. took the lead as the two GT4 Ginettas and the Jones brothers’ GT3 McLaren squeezed three wide past the pits with just a few laps remaining.

A second 25 points in the space of a few hours, along with long time points leaders Jones and Wenham only taking 10 points for fifth (and last) in class after their problems meant the points lead changed hands.

There are four races remaining in the season with two hour races at Brands Hatch and the season ending Donington Park meeting sandwiching two hour long races at Zandvoort in early September.

Optimum Motorsport to field a second McLaren 720S GT3 in the Pro-AM...