Corvette Have Mixed Weekend At COTA 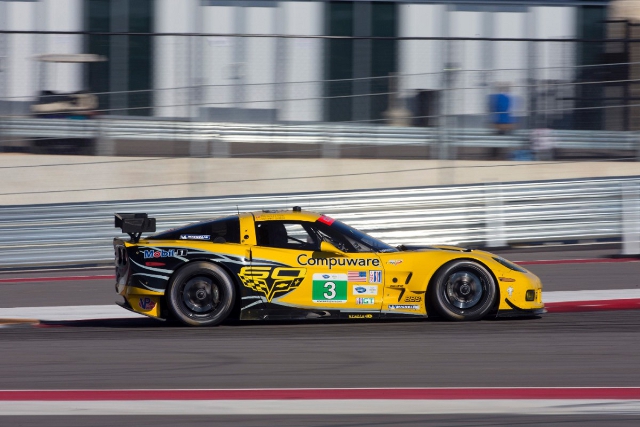 Corvette Racing have experienced the stereotypical mixed weekend at Austin in the American Le Mans Series (ALMS) as one car won and the sister car retired.

Starting with the bad before the good, the #4 of Oliver Gavin and Tommy Milner – which came into the race with the drivers championship lead – retired with a gearbox failure roughly an hour into the race. The gearbox had been giving Milner issues from 10 minutes in, the long time Corvette driver radioing in about difficulties shifting into third gear.

Milner said: “It’s a disappointing day. A gremlin that was around all weekend finally bit hard in the race, which is unfortunate. It doesn’t kill our drivers’ championship hopes but it puts a big damper on them. It’s great for the No. 3 guys. It’s hard to be too mad because our teammates are out front, doing well and have won two in a row. So that’s good for them. This is how a two-car team should be. We have two very good teams and two very good cars.

“The weekend started pretty poorly in general. But we had a great qualifying effort, which was a whole team effort. We had great cars in the race, obviously. All credit to Corvette Racing.”

However, on the opposite end of the emotional scale was joy for the #3 Corvette – as mentioned by Milner – after they took the victory with Antonio Garcia and Jan Magnussen on board fighting the BMWs and SRT Vipers for the majority of the 2 hour 45 minute race.

That victory brings them right back in to the fight for the drivers crown as the ALMS circus hits Virginia International Raceway on October 6th for the penultimate round of the final ALMS season, with both cars in a great position the fight could go down to the wire at Petit Le Mans or be all but settled in Virginia.