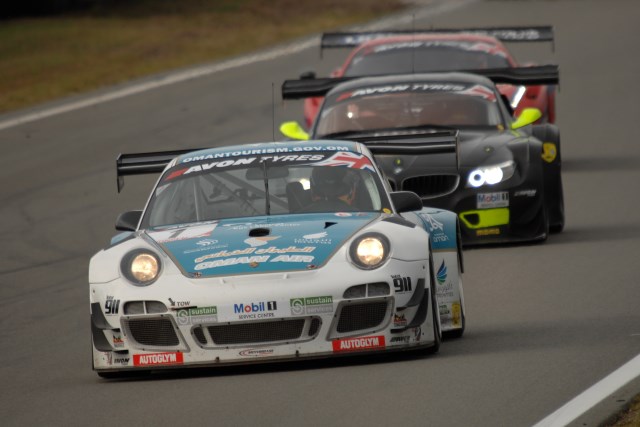 A fantastic defensive drive from Michael Caine gave Oman Air Motorbase their second race win of the Avon Tyres British GT Championship, their first on the track after their Snetterton race win was decided in the steward’s office.

Caine ended the race half a second ahead of the 888Optimum BMW Z4 GT3 of Dan Brown, with the entire top six covered by just 2.3 seconds after a frantic last ten minutes of the hour long race.

Those ten minutes saw possession of the lead change – incredibly briefly – only once, while Brown exchanged positions with Rob Barff in the FF Corse Ferrari after both made unsuccessful attempts to topple Caine.

Brown was the first to challenge, having caught Caine after passing John Gaw in the PGF–Kinfaun Aston Martin started by Phil Dryburgh. From nearly six seconds Caine’s lead was chipped away, suggesting the result of the race – an 888Optimum win – was little more than a formality. However, once Brown caught the Porsche a way past was not so easy. Instead it was Barff (also having passed Gaw following the mid-race driver change stops) who was catching the lead pair and when Brown made his move on the lead at Tarzan Barff was there to take advantage.

For a matter of metres Brown was in the lead, but he ran wide around the Zandvoort track’s signature first turn, allowing Barff to slip through to second and Gaw to latch back onto the rear of the BMW. Barff, quick throughout the weekend so far, with a front row start for tomorrow’s second race, found it just as difficult to find a way past the Porsche, laden with 75kg of ballast as both Caine and co-driver Ahmad Al Harthy are silver graded drivers.

His move for the lead came on the final lap. He looked to the inside at turn seven, which became the outside for turn eight. Just as Brown was Barff was unable to take the lead, instead falling back to third behind the black BMW. He was lucky to only lose a place as the battling for the lead had bunched Gaw, Ollie Bryant and Phil Keen up on the tail of the top three.

Caine took over the car in the lead, Al Harthy having made the most of his pole position to take the lead on the opening lap and start to pull away into a lead of over two seconds in the opening laps over Marco Attard in the Ecurie Ecosse BMW Z4 GT3.

Attard had taken second from David Ashburn on the opening lap, the Trackspeed driver struggling with a misfire in the #31 Porsche. His problems quickly became more serious, trying to battle against the problem Ashburn accelerated too soon out of Hugenholz on lap two, just as the flat-6 behind him literally fired on all cylinders. With too much power delivered to the rear wheels Ashburn spun into the wall, damaging the radiators concealed within the front of the car.

Ashburn’s retirement promoted Gary Eastwood – in the FF Corse car to be taken over by Barff – to third with Dryburgh and Derek Johnston, the latter in the MTECH Ginetta G55 GT3 completing the early top five that was brought under the control of the safety car after Rick Parfitt Jr. crashed heavily at the final corner in the Optimum Motorsport Ginetta G50 GT4.

The accident – which Parfitt Jr. was unhurt in – could possibly rule them out of tomorrow’s race. It followed contact at Tarzan at the start of lap two between Parfitt Jr and title rival Declan Jones. The damage to the rear of the Optimum car proved too much at Arie Luyenduyk Bocht, the car spinning off into the tyres, before continuing to rotate down the pit straight. Parfitt Jr.’s retirement played into the hands of Jones and the Century Motorsport team. Jones led under the safety car, but with mechanical problems – co-driver and team boss Nathan Freke guessing a blocked catalytic converter – the car was lacking straight line speed, leaving it vulnerable to attack with both Dan Eagling and Alex Osborne able to drive pass with little issue.

Eagling went on to claim the first class win for the Redgate/Lifetime Racing team and co-driver Matt Smith. Osborne – in the APO Sport car started by James May finished second in class. Third place allowed Jones to cut his deficit in the championship standings to 12.5 points, with further potential gains to come.

Despite good early progress from Andrew Howard – moving from 18th to 13th before the safety car – the championship leaders failed to score a point, losing the points lead to the Ecurie Ecosse pair of Attard and Bryant. The BMW drivers lead by 3.5 points from Howard, but the win lifts Al Harthy and Caine into third, just four points off the points’ lead.

Matt Bell and Mark Patterson – third in the points before the race – finished seventh. They were one of several team who were in the right position in the train to pit as soon as the pit window opened as the safety car returned to the pits. However, what should have been an advantage proved a hindrance as Bell, and many others who pitted early, were held by a red light at the end of the pitlane.

That helped keep the lead battle the preserve of the early leaders. Joe Osborne finished eighth in the 888Optimum BMW that was the first car to make its pitstop. Rembert Berg and Warren Hughes took ninth. Piers and Ron Johnson tenth, taking some lasting benefit from being the last of the GT3 runners to pit.

The second of the weekend’s races is scheduled for 12 noon tomorrow local time (11am UK).

By James Thompson
2 Mins read
McLaren will resume its suspended Driver Development Programme for the 2021 British GT as Team Rocket RJN will enter its four drivers in the GT4 category this season.
British GT