British GT Finale: In It To Win It – GT4 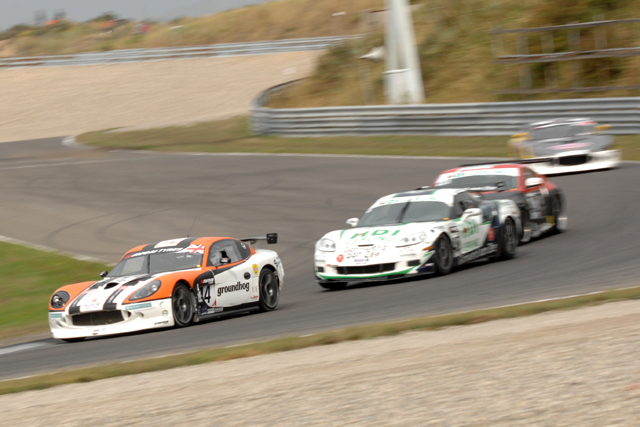 Five teams in near identical Ginetta G50 GT4 start this weekend’s Avon Tyres British GT Championship decider with a chance of at least one driver taking the class title.

The category became the scene of controversy at last month’s Zandvoort races drivers racing for the lead clashed, ultimately causing a huge crash that irreparably damaged one of the cars. The team in question were then denied the chance to race a spare chassis the following day, though their main rivals failed to capitalise on their absence as a win on track was taken away after the car failed scrutineering checks.

While not a stellar weekend for either of the top teams their problems opened the door to allow two more teams into the title fight and with the Dutch drama still fresh in the memory there is sure to be a fitting finale at Donington Park this weekend.

Prior to the weekend’s action www.theCheckeredFlag.co.uk take a look at the four teams in contention and explain how each of them could take the class crown.

Second year British GT drivers May and Osborne have had their fair share of accidents this year – not all of them their fault. Contact with a GT3 car at Zandvoort ended their race while they were on course for what have been victory, a result that would have moved them right into title contention for this weekend. It’s been a race to repair the car, and find the funds for the finale, but a smash-and-grab raid on the title would be just desserts for the cake shop backed duo.

High Point: Coasting to second – Alex Osborne may have had the pace to catch the Optimum Motorsport car for the lead in the final stages of the two hour Brands Hatch race. However, the APO driver was to have to switch from attack to conservation mode as the fuel ran low and Osborne all but pushed the car down the sloping pit straight for second place.

Low Point: Rockingham Retirement – After leading early and, though by the time back in second, racing on as others hit problems the Rockingham weekend should have been another strong result for the APO Sport team. However, a penalty for having the engine running during the pitstop dented their chances before a broken driveshaft ended them entirely.

Will be champions if…They win, but in a small class they would need pre-race points leaders Optimum Motorsport not to score and Century Motorsports’ team to miss the podium.

A late deal looks on course to bring Wenham back to the championship and back into the title fight – though her ability to score points on her first weekend with the Blendini squad remains to be confirmed. She will join Rory Bryant in the team’s entry at Donington Park. Bryant – with Anthony Rodgers – gave the team their first GT4 win of the season in the second race at Zandvoort, and but for a problem in the first race that weekend could have been celebrating the milestone a day earlier.

High Point: Double top to open – Starting the season with Declan Jones and Century Motorsport Wenham won both of the races on the Easter Weekend at Oulton Park. Having finished second in class in 2012, but without a race win, the victories – especially the second race in which Wenham resisted Parfitt Jr. in the final laps – were a perfect start to the season, one she celebrated soaked in champagne on the podium.

Low Point: On the sidelines – Having to sit out the series’ trip to Holland has split Wenham from Declan Jones in the championship and caused her to slip from genuine championship challenger to title outsider with a new team for the all-important weekend.

Will be champion if…. She and Bryant win (presuming she is eligible to score points). However, Optimum’s entry would need not to score points. She would also need former co-driver Declan Jones to finish no better than third (a would-be third win for Wenham proving the tie-breaker).

The underdogs of the title fight, but took advantage of the Zandvoort dramas to move into position to pose a serious threat if the battle between the top two gets heated once more. Eagling has proved himself to be one of the quickest men in the class with two pole positions to his name and with Smith improving over the course of the year they start the final race of the year in the best form they’ve shown all year.

High Point: Taking the first win – After fighting for ‘just’ podiums for the rest of the season Eagling and Smith were in position at Zandvoort when incident and mechanical problems took the early leaders out of the race for the win. Added a second place in the second race of the weekend into third in the championship for this weekend.

Low Point: Worst possible start – Smith’s 2013 campaign began with a bang when he spun and crashed through the rapid Druids corner at Oulton Park. He emerged unhurt, but the damage to the car was severe enough to reduce he and Eagling to spectators for the rest of the Easter Weekend.

Former Ginetta Junior and Supercup racer Jones is joined by team boss Nathan Freke again this weekend after the pre-Zandvoort departure of Zoe Wenham from the team. A catalytic converter problem – and an attempted fix – caused the team problems at Zandvoort, ending in them losing the race two win. Thus the Jones/Freke partnership remain an unknown quantity over the course of a race – especially the longer format weekend that awaits at Donington Park.

High Point: Local lad done good – Jones, then with 2012 class vice-champion Wenham, got off to a roaring start at Oulton Park. The Liverpudlian driver was instrumental in the team taking both wins away from his local track, with dominance of the Good Friday practice sessions and a pole position was an early sign of intent on the title.

Low Point: Costly problems – Aside from the Zandvoort disqualification the Century team’s sole only real poor race came at Silverstone when mechanical problems stranded Zoe Wenham by the side of the track as the race continued on. The problems put them not only behind the other British runners in the field but the bulk of the European runners joining the series as a one off resulting in points for just a tenth place finish.

Will be champion if….he and Freke win, with the Optimum Motorsport team only third or worse. To win the title with a second place this weekend they need Smith and Eagling not to win and for Optimum to finish just sixth. Should Optimum fail to score Freke and Jones can finish as low as fifth in class and still win the title though not if Smith and Eagling finish first or second or APO Sport take the victory.

Despite failing to score a point in Zandvoort Ratcliffe and Parfitt Jr. maintain a healty enough lead in the championship that they have to be considered the favourites to take the title. After a run of three race wins bridging the summer break they were in position to clinch the title in Holland with the right results, but their issues brought the title fight to the final round of the year.

High Point: Fighting back from the front – The Optimum team had yet to score a win in 2013 until Snetterton, but maximum points from both of the races on the Norfolk track thrust them into the championship lead. In the second race of the weekend Ratcliffe had the car cut out beneath him, leaving he and Parfitt Jr. an uphill struggle the reached the top of in the closing laps moving from third to the lead in a single lap.

Low Point: Leaving Holland empty handed – There’s no avoiding it, missing out on points at Zandvoort could have been a decisive blow in the championship, and it was only because others had issues that it wasn’t. The only positive is that the controversy that surrounded their accident and then Sunday non-appearance set the title decider up perfectly.

Will be champions if….They win or finish second regardless of any other results. They can finish third, fourth or fifth in class if neither Century nor Redgate/Lifetime teams wins and still take the title from sixth place at Donington so long as Jones and Freke finish no better than third and Smith and Eagling don’t win.

If that’s confused you, firstly you clearly haven’t read the various scenarios for the GT3 class championship this weekend and secondly you have nothing to worry about because www.theCheckeredFlag.co.uk will have full coverage of the Donington Park weekend including keeping track of the championship standings throughout Sunday’s 120 minute race.