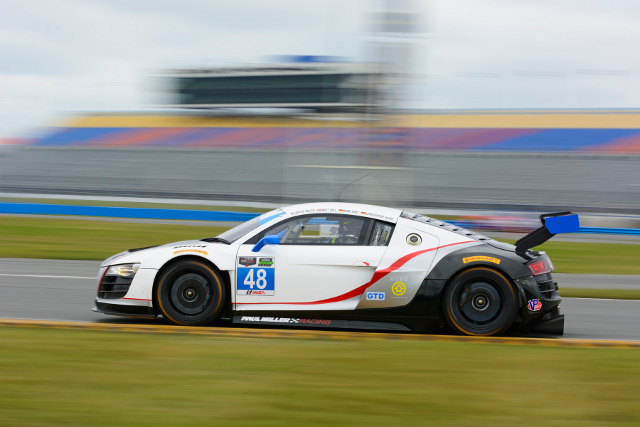 Matt Bell will swap his normal United Autosports Audi for that of Paul Miller Racing as he races in the US for the first time as part of the team’s GT Daytona class effort at the Rolex 24 at Daytona.

Bell has been a regular behind the wheel of an Audi R8 LMS in Europe, racing in the Avon Tyres British GT Championship as well as the Blancpain Endurance Series and the FIA GT3 European Championship with Anglo-American team United Autosports.

Bell finished second in the 2013 British GT points’ standings having won the final race of the year to continue an enviable record of having picked up victories in the series in three consecutive years.

In joining the Paul Miller Racing squad – who swap for Porsche to Audi for the inaugural TUDOR United SportsCar Championship season – for the Rolex 24 Bell will join forces with Germans Rene Rast and Christopher Haase and American Bryce Miller. Theirs will be one of five Audi R8 LMS in the GTD field for the start of the TUDOR Championship.

“The car is slightly different to the LMS ultra that I have driven for the last couple of years in Europe,” said Bell. “Overall though, on paper anyway, the car is very similar. It has less downforce, which will be the main thing to get used to, but I think it will be fairly similar to the original car that I drove back in 2010.”

“This will be my first experience of American oval-style banking, which I’m looking forward to,” he continued. “I haven’t raced at Daytona before but historically I’ve picked up circuits very quickly so I’m looking forward to the challenge. We have a very strong line-up; there are no weaknesses across the board. With the large number of cars on track the key will be staying out of trouble and putting in consistent stints, although hopefully there will be a few quick laps in there too.”

“This will be my first race in the US so I’m sure there will be differences,” he said.  “I know safety car procedures and some other rules are a bit different, but that’s more the engineers’ department.”

He does, however, note one similarity between the racing on the two continents; “my job is to get in and drive quick, just the same as in Europe!”

Matt’s older brother Rob is almost entered for the race, named as one of the drivers of SRT Motorsports in the GT Le Mans category.

The younger Bell and the rest of Paul Miller Racing continue testing at Daytona with the three day Roar Before the 24 test sessions set to continue until January 5. He will then prepare for the race itself (January 25-26).