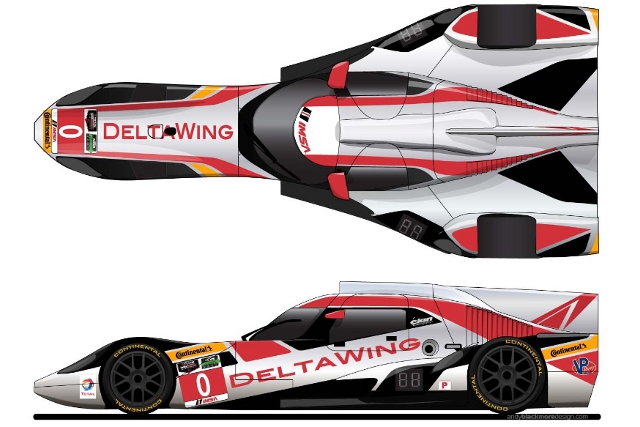 The DeltaWing Racing Cars team are aiming to stay out of trouble as the machine makes its oval debut in Florida at the Rolex 24 at Daytona.

The machine, decked out with a new livery thanks to graphic designer and master of Spotterguides.com Andy Blackmore, will be battling with 60 other cars with the aim of scoring a strong finish in the Prototype (P) class in what will be the cars first full season in its roofed form.

Don Panoz, the Managing Partner of the team and founder of the American Le Mans Series, said: “I am very pleased with the car’s performance at Daytona so far. I realize that it’s a big challenge for us, but the team has done a great job of getting the car prepared and sorting out the issues we had previously with the roadster. We want to be competitive but we realize that it’s a long race and there will be quite a few pit stops. We need to be disciplined and be able to adjust ourselves to the situation, so we can take advantage of opportunities. I’m looking forward to an exciting race.”

The team has gone for four drivers in the car for the twice round the clock race, with last year’s regular drivers Katherine Legge and Andy Meyrick being joined by Caterham F1 test driver Alexander Rossi as well as 2013 Indy Lights runner up Gabby Chaves.

Legge commented: “It’s all about reliability at Daytona.  The car is quick and it handles very well here, so I really believe that if we can avoid trouble, we will be in with a shot at winning toward the end of the race. But to get to that critical Sunday time frame is key. There are so many cars – it’s going to be about getting through the traffic quickly but doing it safely. We were lucky to have avoided that at the test – part luck and part good judgment!”

Rossi will be partaking in only his second endurance race – his first being Le Mans last year – but thinks the car is a very stable platform: “I’m getting more and more comfortable. Surprisingly, you don’t treat the DeltaWing any differently than you would any other car. There are behavioral characteristics and handling characteristics that are a bit different, but in terms of drivability, visibility and the feedback that you get, it’s just like a conventional race car. We had a very good test a few weeks ago, especially in terms of reliability, so we’re going into the race week with very high expectations. The fans really are attracted to the DeltaWing and the team is very committed to making sure it’s not just a car that everyone wants to look at, but a car that gets results. We’re well on our way to that.”