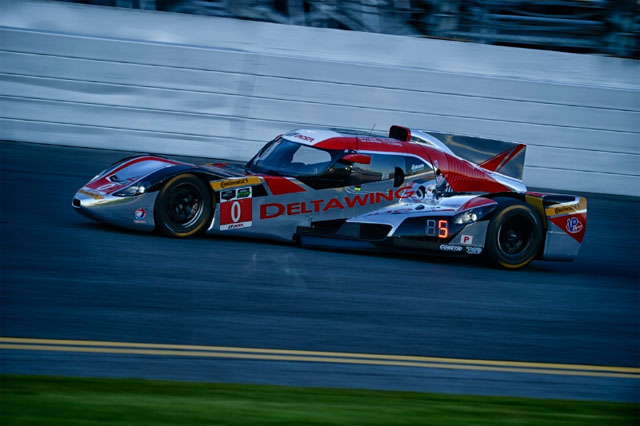 The DeltaWing Racing Cars team will line up eighth for the start of the Rolex 24 at Daytona, beating many of its former American Le Mans Series rivals in the process.

The fastest time of the qualifying session came from Katherine Legge, who’s lap of 1:39.270 seconds was the fastest lap the DeltaWing has ever completed around Daytona’s high banking.

“We’ve made a lot of changes to the car since the Roar but now it feels like the car we had then, which was really quick,” said Legge, who shares the #0 DeltaWing with Andy Meyrick, Alexander Rossi and Gabby Chaves. “The car was very well set up and we were able to show what we’re capable of. I think we have an advantage on some of the other cars, because of how quickly our tires and brakes come up to temperature – it only takes a lap, lap and a half max. That means we can make up time on every pit stop. The team worked very hard on the setup before we got to the Roar so we’re polishing it and making sure we don’t have any issues. So now that’s the key – if we can continue to keep pace with the other cars, we can be in with a shot to win on Sunday.”

The DeltaWing was the fastest non-Daytona Prototype car in qualifying, beating all of the former ALMS LMP2 entries, and even beating two of the DP machines.

“You go into every race thinking you can win it, otherwise there’s no point,” added Team Manager, David Price. “It’s going to be hard over 24 hours, with all the DPs, but if we stay out of trouble and all the hard work we’ve put in over the past year starts to pay off, we’ve got a good chance. It was much easier to get a clear lap [than at the Roar Test Days] with only 18 cars on the track – you can get a clear lap the whole way if you’re clever. We achieved what we thought we could by doing times in the mid-1:39s. I was anticipating being in the top 10 and we are where we thought we should be.”