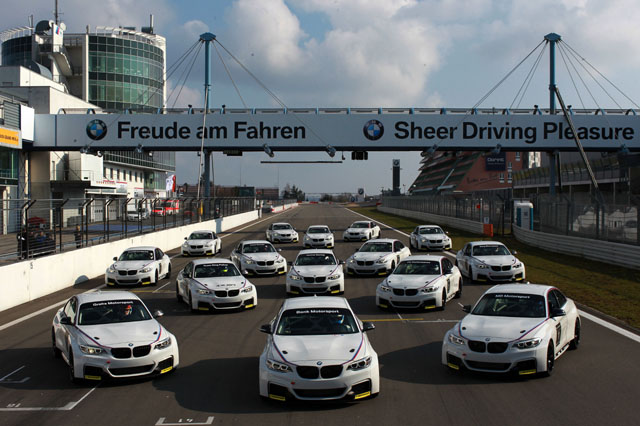 The first 15 customer teams have received their BMW M235i Racing machines ahead of the 2014 season at the Nuburgring.

BMW Motorsport announced last year that it would be introducing a new entry-level model in its range of customer cars and within a short space of time orders were flooding in for the 59,500 Euro car.

The M235i Racing is aimed at creating an affordable entry in to motorsport. The 328bhp car, based on the M235i Coupe production model, is powered by a straight six-cylinder engine, with a capacity of 2979cc. Motorsport-specific electronic aids include ABS, DSC and traction control.

As soon as the teams received the keys to their new machines, the teams were given a detailed insight into the development of the M235i Racing before heading straight out on to the Nurburgring circuit. The test session was supported by technicians from both BMW Motorsport and tyre suppliers, Dunlop.

“It was a special moment, when our BMW customer teams followed each other out of the pit lane for the first time with the new BMW M235i Racing,” said BMW Motorsport Director, Jens Marquardt. “Over the last months we have invested a lot of time and effort in the development, testing and assembly of the BMW M235i Racing for our customers, and we are now happy to see the first 15 models in action. The huge interest has confirmed we were absolutely correct to offer a competitive and reasonably-priced entry-level model. I hope our customer teams have a successful first season with the BMW M235i Racing.”

“I can tell anyone who is purchasing a BMW M235i Racing: they are getting a genuine racing car, which is great fun to drive,” added BMW works driver Dirk Werner, who was on hand alongside fellow driver Dirk Adorf to offer the customer teams advice and support. “Generally speaking, I find it fantastic that BMW Motorsport is providing those just starting out in motor racing with a high-class platform, in the form of this car and the BMW M235i Racing Cup.”

By James Thompson
2 Mins read
Title contenders Rob Collard and Sandy Mitchell have taken pole for the British GT Silverstone 500. All four GT3 titles contenders are in the top five places.
Formula 1Other

By Jasmine Butler
2 Mins read
Williams Racing look ahead of the Emilia Romagna Grand Prix.
Other