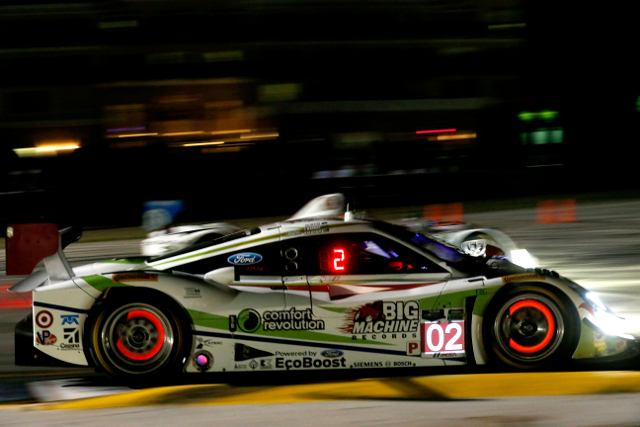 Though slower than his earlier lap time Dixon’s 1:53.090 in the darkness aboard the car he shares with Tony Kanaan and Sage Karam was still more than a second faster than Sebastien Bourdais in the #5 Action Express Racing Corvette DP that won at Daytona. Just as in January the car will be driven by Bourdais and regular drivers Christian Fittipaldi and Joao Barbosa, who set the car’s fastest lap of the day in the opening session.

Extreme Speed Motorsport were fifth fastest, the best of the LMP2 teams in the session, the best lap of the HPD team 1.555 seconds slower than Dixon’s best lap.

RSR Racing’s #09 was the fastest of the LMPC spec class, Bruno Junqueira less than a tenth quicker than Colin Braun in the CORE Autosport car.

Oliver Gavin put the #4 Corvette he will share through the 12 hours with Tommy Milner and Robin Liddell at the top of the GT Le Mans. His 2:00.157 around the 3.74 track was more half a second quicker than John Edwards’ best in the #56 BMW Z4 GTE. The sister BMW Team RLL was third, a further three tenths off the class pace.

Leh Keen led a Porsche GT America one-two at the head of GT Daytona, with a 2:04.570 lap in the #22 Alex Job Racing entry. Andy Lally was second fastest for Magnus Racing, Jeroen Bleekemolen third quickest in the SRT Viper entered by Riley Motorsports.