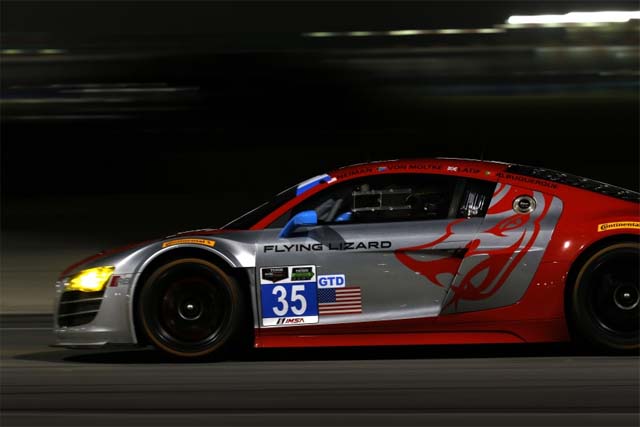 Flying Lizard Motorsports heads to Sebring off the back of a top five result in Daytona confident they can move further up the standings.

Since the Rolex 24 at Daytona, the team’s pair of Audi R8 LMS cars have completed a successful test in late February at Sebring International Raceway in preparation for the famous Twelve Hours of Sebring.

Both the driver lineups will be unchanged for the twelve hour endurance classic, with Seth Nieman, Dion von Moltke, Filipe Albuquerque and Alessandro Latif in the #35, while the #45 car will see Nelson Canache Jr, Spencer Pumpelly, Markus Winkelhock and Tim Pappas share driving duties.

“The Sebring race track provides its own unique challenges and the Audi has shown to be a great match for them,” said Chief Engineer, Steve Conover. “We made good progress towards a race setup at the last test, starting with what we learned at Daytona and taking some pretty wide ranging swings at setups before settling on what turned out to be the middle ground in most respects. We should be ready for the race though, which is a good thing given the limited practice time and fixed tire allotment, as well as the task of getting four drivers through each car, one of which, Filipe, has not driven the R8 LMS around Sebring before. So productive development work needs to be complete entering the week and we should be able to utilize all of the available practice time for the myriad tasks we have left.”

As a result of their finishing positions in Daytona, both teams occupy the same positions in both the TUDOR United SportsCar Championship and the four-race North American Endurance Championship (Rolex 24, Twelve Hours of Sebring, 6 Hours of the Glen, Petit Le Mans). The #35 car holds fifth place in the standings, while the drivers of the #45 sit in second.