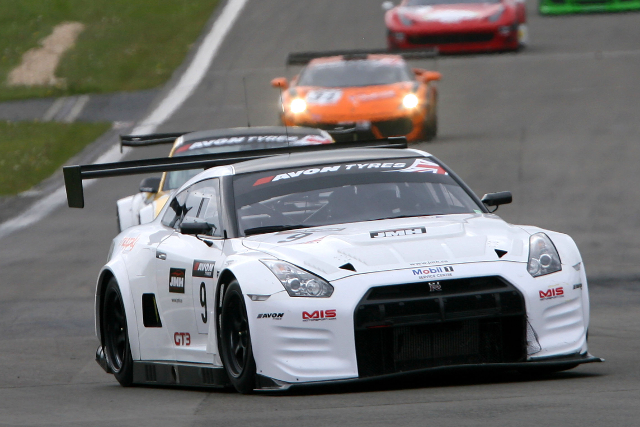 Tom Onslow–Cole and Paul White are to share a Nissan GT-R NISMO GT3 in this year’s Avon Tyres British GT Championship. The car will be run by JMH, supported by Nissan’s factory GT3 partner JRM.

For JMH it marks a return to the championship, having run brother Freddie and Benji Hetherington in an abbreviated program during 2012.

“Tom’s an extremely talented professional driver and I think Paul is one of the best amateurs in GT racing,” said JMH team principal Jason Hughes. “The fact that they’ve committed to the British GT Championship with the Nissan GT-R is great news for us and the brand.”

The team will run under the name of White’s Strata21 team. The experienced sportscar and endurance racer won the Class 1 title of the British Endurance Championship in a Mosler in both 2011 and 2012 but has also raced in Aston Martin machinery in the past, including with Onslow-Cole at Brands Hatch last July.

While racing an Aston in British GT was an option, Onslow-Cole explained speaking to theCheckeredFlag.co.uk, the support of both JMH and JRM was a perfect fit for his and White’s 2014 plans. He said; “the opportunity with the Nissan to be running so closely with the factory in one of only a few cars is great, it’s exactly what we need for out venture into British GT.”

Following a decision to move away from the British Touring Car Championship – taken with “much consideration” Onslow-Cole admits – it was White who set into motion the events the culminated in the deal.

“He actually alerted me to the seat,” said the BTCC race winner. “It was actually done over a tweet. The team had tweeted that they had got drives available in British GT and Paul saw it and forwarded it to me and I went on to do a bit of investigation. The more we looked at it the better and better it seemed to be with factory support from JRM in a 2014 spec car.”

Both Onslow-Cole and White got their first running with the team – albeit in a 2013 spec car – at Snetterton on April 1.

“The Nissan to look at is at is a lot bigger but to drive it doesn’t feel as extreme as that,” Onslow-Cole compares his early impressions of the GT-R to the Vantage GT3. “It definitely is bigger and you can feel its size but it’s not a hindrance like you think it would be. The strength of the Nissan seems to come in the high speed, it’s got a lot of aerodynamic downforce and a strong engine but with modern GT3 and the BoP on an overall lap time they’ll be similar but I’m sure there will be strengths and weaknesses when we go to different tracks.”

Though the Cheshire based team intend to travel to the Oulton Park rounds of the Championship on Easter weekend they are currently still without an entry for their home event due to the capacity British GT grid for the upcoming season.