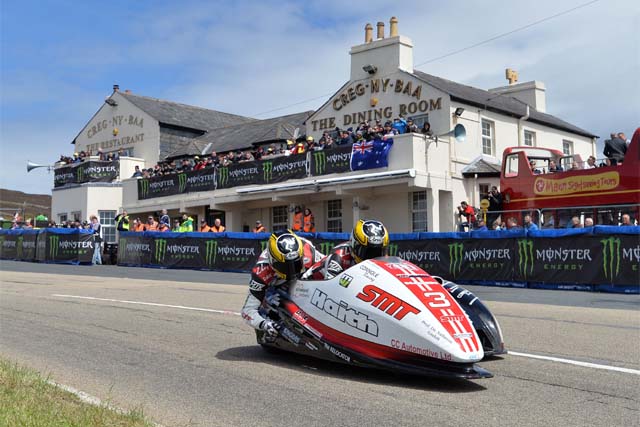 The 2014 Isle of Man TT will see a stellar line-up of outfits do battle in the pair of Sure Sidecar TT races.

Over 60 machines, featuring six former winners and nine drivers with 110mph+ laps under their belts, have been accepted for the races, which reverts back to the open regulations for the first time since 2010.

Leading the field off down Bray Hill as number 1 will be sixteen-time winner Dave Molyneux, once again riding alongside passenger Patrick Farrance. The pair scored the double in 2012, but had to settle for two podium results in 2013.

Last year’s winners, Ben & Tom Birchall and Tim Reeves & Dan Sayle, will be out again to try and deny Molyneux his seventeeth victory. The Birchall brothers, who will ride off at number 2 will also be chasing the World Championship in 2014, while Reeves and Sayle will be concentrating on the TT as the main event of their season, riding off at number 3.

Former winner John Holden and Andy Winkle will start from Glencrutchery Road at number 4, the same position they finished both of the 2013 races in. As well as a brace of fourths at the TT, the pair also took the 2013 British F2 Championship title.

Hunting down the leaders from number five will be Conrad Harrison and Mike Alyott, who are still yet to take their first TT victory, although with six podium results in the last seven races, a win doesn’t seem far away for the Bradford-based driver. They will be followed by another consistent outfit in Gary Bryan and Jamie Winn.

Starting from seventh will be returning former race-winner Ian Bell, who will be partnered by his son Carl. Bell took victory in 2003, but hasn’t raced at the TT in 10 years, but has enjoyed strong form recently in the British Championship, the Southern 100 and at Scarborough. Following Bell will be fellow returnee Nigel Connole, who hasn’t raced at the TT since 2008.

The final seeded entry, following the withdrawal of the number 9 entry, sees Greg Lambert set off as number 10 for his 22nd successive year of TT competition. He will be joined by double podium finisher Kenny Cole.

The remainder of the grid will be set by qualifying times, with quality expected to shine through from the top to the bottom of the 60+ strong entry list.