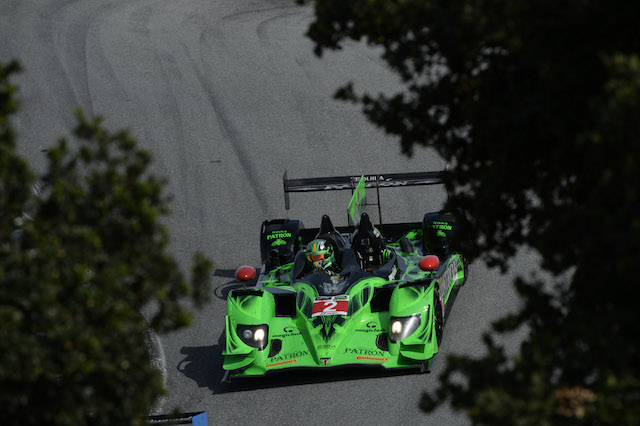 Extreme Speed Motorsport (ESM) and Corvette are amongst the quartet to have gained pole positions as the TUDOR United SportsCar Championship hits Monterey.

In the top Prototype class (P) it was a scrap between two very different definitions of P cars that battled for the top spot. The Spirit of Daytona Corvette DP of Richard Westbrook battled Johannes van Overbeek in the ESM HPD in the dying minutes of the fifteen minute session with the P2 finally winning the fight.

With a time of 1:18.561 it was not only the first pole by a P2 car in the TUDOR Championship, but also the first overall pole for van Overbeek – who hails from nearby Oakland. Britain’s Westbrook was only 0.227 seconds further back, a sign that the Balance of Performance changes seem to have had a result.

“I’d much rather win than come in on the pole, but it’s a start,” the ESM driver said. “The long fast corners particularly suit this kind of car. We’re still not nearly as fast in the straightaways [as the Daytona Prototypes], but we make up for it in other places, so I think that will make for a very interesting race tomorrow.”

In the second prototype class, Prototype Challenge, Bruno Junqueira scored his second consecutive PC pole position after setting a time of 1:19.723 to keep Renger van der Zande at bay and score pole position for the first of the two two hour sprint races that make up this years Monterey Grand Prix.

Van der Zande was only four tenths further back in the Starworks FLM09, and Sean Rayhall qualified third in the 8Star Motorsports car.

In the GT Le Mans class, it was yet another year of Corvette domination with Antonio Garcia taking the #3 C7.R to the team’s sixth pole position at Laguna Seca. With a time of 1:22.373, the yellow peril shut out the RLL BMW of John Edwards who was only 0.205 behind the Detroit racer, he himself was exactly one tenth faster than the Porsche North America 991 of Richard Lietz who will start in third.

Garcia said. “You had to focus, and just close your eyes and take a little bit of risks, for sure, and I think I took most of it. I think the lap was pretty good, right on the limit. The Corvette C7.R worked really good. I hope to carry on the momentum that we have. Now Jan knows what he needs to do, just give me the car with a 10-second lead and I’ll just finish.”

Finally, GT Daytona and a last lap scorcher by Spencer Pumpelly in the #45 Flying Lizards Audi R8 saw the Californian team record yet another pole position to make sure they start on pole for the two hour race today.

The session was full of stoppages with the session having to be extended to ensure 10 minutes of green flag running after the Spirit of Race Ferrari went off track. Pumpelly said. “We had that extra bit of time. The team told me I was on my last lap, but I didn’t see the checkered so I said ‘Do I get another one?’ So I just kept on it all the way around and put down a great time.”

Both the two hour sprint races run today with PC and GTD running first with P and GTLM running into the sunset at Laguna Seca.