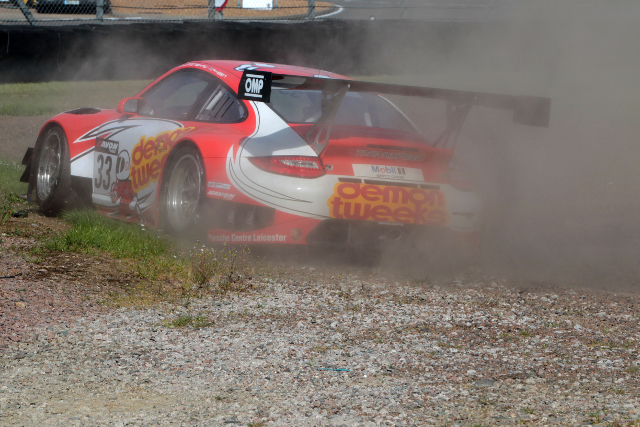 Early incidents resulted in a pair of DNFs for Trackspeed at Rockingham, leaving the defending teams’ champions in the Avon Tyres British GT Championship frustrated.

The team, who run a pair of Porsche 997 GT3 R for Jody Firth and Warren Hughes and Jon Minshaw and Phil Keen, believe their charges are compromised disproportionately by the series’ Balance of Performance (BoP). As such – having qualified first, second and third at the track last year the squad had to content themselves with ninth and eleventh places on the starting grid.

In the first race using the new qualifying format in which an aggregate of both drivers’ best laps decide the grid order Minshaw and Keen lined up ninth with Firth and Hughes – who have to carry a further 75kg of ballast, designed to counteract their higher driver gradings.

Unfortunately their qualifying results deposited them into the middle of the snarling pack where some contact in the opening laps is, sadly, inevitable.

Starting the black and orange #12 car Firth tried to avoid the contact as the field fanned out around the Rockingham oval before pinching down into the circuit’s infield. However, while Firth was trying to evade trouble, trouble found him as a driver behind misjudged his braking point and cannoned into the rear of the Porsche.

The contact forced Firth briefly off track and so down the order but it had also done damage to the rear bodywork. The left rear corner was forced against the exhaust which caught fire, Firth bringing the car to pits where quick work from other team and the track’s marshals limited the damage to the extent where Firth was able to rejoin.

He did so, however, five laps down and with all realistic hope of taking a first points paying position gone. The pair finished in 15th position.

With damage to the rear of the #12 car the reason for their disappointing results Minshaw and Keen’s #33 was stopped by damage to the vulnerable radiators in the front of the car.

Minshaw was attempting to haul the Demon Tweeks liveried car back through the field after being pushed into a spin on the opening lap of the race. However, a slower GT3 driver caught him out on his way up the order, contact puncturing the radiator, forcing a first retirement of the year of the duo.

The British GT season continues at the end of May with the series’ longest race of the year – three hours on the Silverstone Grand Prix circuit.