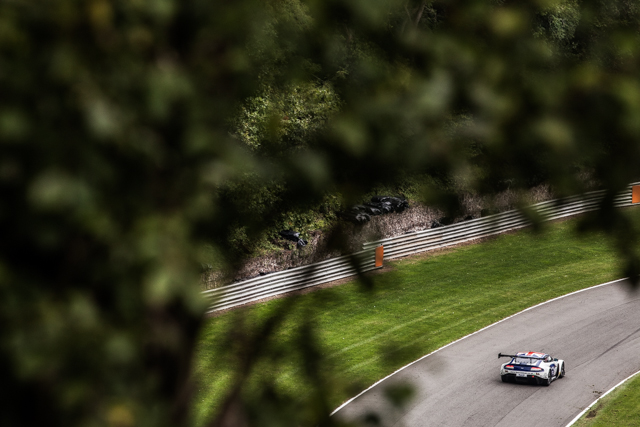 Both the GT3 and GT4 teams from Beechdean AMR squad will start tomorrow’s two hour race at Brands Hatch from pole position. However, the two teams face different challenges at the penultimate round of the year.

GT3 – an overall – pole was secured by reigning champion Andrew Howard who set the fastest lap of any of the ‘Am’ drivers who took to the track in the second half of the session. His 1:26.953 set among the first flying laps of the session was added to the 1:25.524 which Jonny Adam set during the first part of the qualifying session.

That time, though, was only second fastest in the first 15 minutes as Nick Tandy set the pace around the 2.4 mile Grand Prix track at the Kent venue. Despite enjoying a 0.358 second advantage over the Beechdean machine David Ashburn – following Tandy into the #31 Trackspeed Porsche – was unable to maintain the hold Tandy had taken on pole position, their combined putting them fifth on the grid.

Instead Adam and Howard’s closest challengers were their Trackspeed teammates, Jon Minshaw and Phil Keen in the Demon Tweeks backed #63. Keen had set the third best time in the first half of the session and was ably supported by Minshaw whose 1:27.152 made certain of the outside slot on the front row of the grid.

The pair of Oman Racing Team Astons will share the second row, both cars among those to move up the order during the second part of the session as the relatively evenly balanced driver pairing in both the #4 and #5 cars paid dividends, Ahmad Al Harthy setting the best time of the second half of the session.

Behind the Ashburn and Tandy Porsche the Astons of MP Motorsport and Strata 21 will start sixth and seventh, Tom Sharp and Colin White enjoying the first outing in the former’s Vantage GT3. The championship leaders, in the form of Ecurie Ecosse pair Marco Attard and Alexander Sims, will start only eighth, seemingly offering the Beechdean duo the perfect opportunity to recoup some points with an eye on retaining the title.

The ‘junior’ half of the Beechdean garage has the opposite problem, if it’s fair to say leading the championship is a problem. Jake Giddings and Ross Wylie lead the GT4 class by 19 points, but Wylie told www.theCheckeredFlag.co.uk are still “taking each race as it comes”.

Just as was the case of the GT3 counterparts the pair moved onto pole in the second half of the session, Giddings able to outpace most of the less experienced drivers in the class. Wylie was disappointed in his own qualifying effort, only fourth fastest behind the Ginetta G55s of Twisted Team Parker and Fox Motorsport and the Team Parker Racing Porsche of Dan Cammish.

While that trio faded backwards in the second session, the pair of Ginettas will start from third and fourth, both the Beechdean crew and the Century Motorsport team of Rick Parfitt Jr. and Tom Oliphant moved onto the front row in class, their combined times less than a tenth apart.

Devon Modell and Andrew Jarman, who enter the weekend second in points for TF Sport, will start from sixth in class.

The Invitation Class Toyota G86 of James Fletcher and Stefan Hodgetts will start from 29th on the 31 car grid.