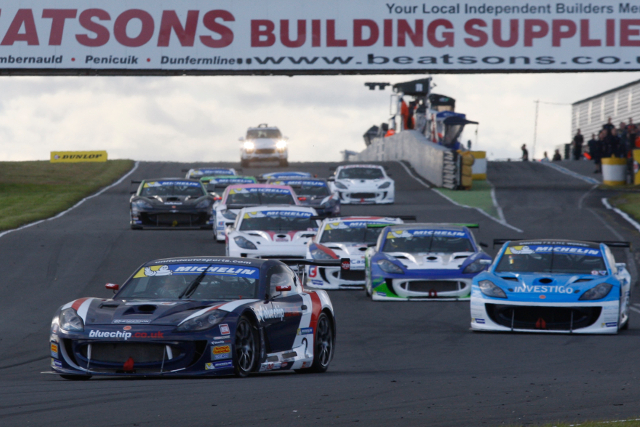 Fresh from snatching a late pole position during a thrilling qualifying session earlier in the day, Breeze emerged victorious from an equally action-packed sixteen lap encounter.

A textbook start from the United Autosports racer saw him lead the field into Duffus Dip for the first time, with championship leader Charlie Robertson in close pursuit.

Their potential early battle was halted briefly as drama for Tom Oliphant, Luke Davenport and debutant Rory Bryant on the opening lap at Scotsman led to an instant safety car period to allow Bryant’s stricken SV Racing G55 to be recovered.

At the restart on lap four, Breeze was instantly able to forge a half second lead over Robertson at the head of the field, with Andrew Watson just clinging on to the front two for the next couple of laps ahead of Will Burns.

The drama intensified soon after, first with an off-track moment at the Clark Chicane forcing Dan Norris-Jones into retirement on lap seven, before a rain shower left the field scrabbling for grip on their slick tyres.

The safety car was back on track on lap nine for a fairly long period to aid the recovery of Oliphant’s Century Motorsport G55, the championship contender ending his race in the wall at Duffus Dip after suffering a lock up under braking in the tricky conditions.

The race hit green with just twenty seconds left on the clock for a one lap shoot-out to the flag. Robertson made a last gasp move for the lead, but the HHC Motorsport racer was pushed wide in the rain, giving Breeze a comfortable run to his third win of the season.

“It’s a good start to the weekend,” Breeze told TCF’s Dan Mason. “Getting the pole position this morning was crucial as it’s difficult to overtake around here.

“It’s fantastic to get the win and the fastest lap, and we’re now getting closer to Charlie [Robertson] in the standings.”

Robertson took second, while Burns continued a great recent run of form with his third podium finish in the last five races after passing Watson for the final podium place on lap nine.

Watson lost further ground on the slippery final lap and ended up in sixth, with David Pittard passing both him and Jamie Orton to steal fourth. Reece Somerfield took seventh meanwhile, with Fergus Walkinshaw a solid eighth in his first race back after three months away – though post-race those positions were switched with a 0.5 second penalty for Somerfield.

Davenport completed the finishers in ninth meanwhile, but only after the United Autosports racer had made a late tyre gamble. During the second safety car period, Davenport switched to wet tyres but the elongated caution period left him unable to gain back the lap he lost changing tyres.