Jager and Baumann Win in Slovakia From Back of the Grid 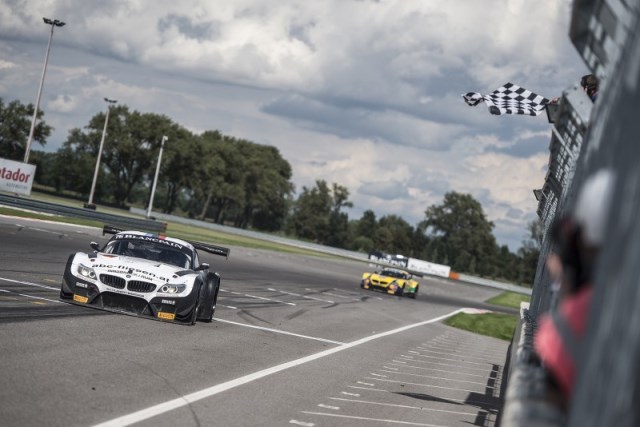 Thomas Jager and Dominik Baumann claimed victory for the Schubert BMW team in the main Blancpain Sprint Series race at the Slovakia Ring from the back row of the grid.

Starting 19th after retiring from race one, Jager benefited from a chaotic start. Qualifying race winner Cesar Ramos got a slow start in the #1 WRT Audi and was swamped by those behind him, leading to numerous cars attempting to all take turn one at once. #2 WRT driver Enzo Ide ended up on the grass on the inside before sliding across the track, and three cars ended their races early in the gravel trap – the #28 Grasser Racing Lamborghini of Hari Proczyk, the #9 WRT Audi of Fabian Hamprecht and the #30 Team Brazil BMW of Matheus Stumpf.

Third-place starter Nico Verdonck took the lead in the #84 HTP Motorsport Mercedes, ahead of the #0 Brazilian BMW of Caca Bueno. The Mercedes of Miguel Toril and Lucas Wolf were third and fourth respectively, with Jager up to fifth.

Jager – a 20-year-old Austrian GT rookie not to be confused with the German driver of the same name – briefly dropped to sixth behind Marc Basseng, but followed the Phoenix Racing Audi past Fortec man Toril.

Up front, Verdonck held off Bueno until the pair made their pitstops in the middle of the race. Verdonck’s co-driver Maximilian Gotz would resume the lead, but then ran wide coming onto the straight, dropping behind Bueno’s team-mate Sergio Jimenez.

Baumann had now got up to third, and he closed down and passed Gotz with 16 minutes left on the clock. He then went on to take the lead from Jimenez inside the final three minutes to deliver Schubert victory in just their second weekend in the series.

Rene Rast recovered from Ide’s early adventure to take third, passing Gotz on the final lap. Wolf and Luca Stolz took Silver Cup honours on their debut in fifth, despite a slow pitstop, one place ahead of the sister car of Sergey Afanasiev and Step Dusseldorp, which had started 20th and last.

Basseng’s co-driver Alessandro Latif brought their car home in seventh ahead of the Bhaitech McLaren of Sten Pentus and Chris van der Drift, the #4 WRT Audi of Vincent Abril and Mateusz Lisowski and the Toril-Armaan Ebrahim car.