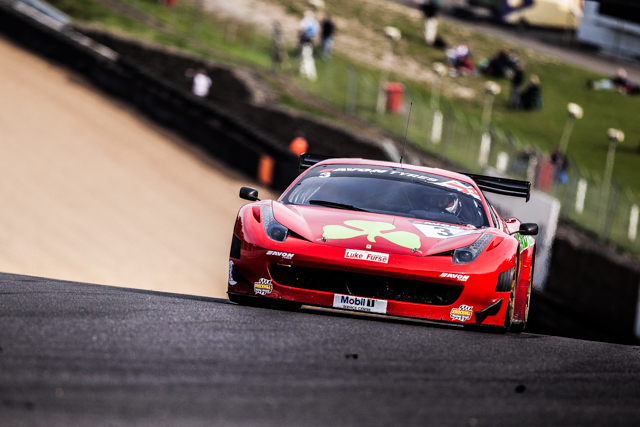 Shaving another tenth from his best time Adam held the top spot through a short red flag period brought out when British GT debutant John McCullagh spun the United Autosports Audi into the tyre wall on the exit of Druids.

Only after the red flag was lifted did Adam’s time come under renewed attack, Alexander Sims leading the assault in the Ecurie Ecosse BMW co-driven by championship leader Marco Attard. Sims, part of BMW’s works driver stable, first moved up to fourth and then to second with a time of 1:26.645, and though he improved to by another tenth he remained behind Simonsen’s time.

Adam’s best time 1:26.721 was third fastest. Trackspeed pairing Nick Tandy and David Ashburn were fourth fastest on their return to the series. Oman Racing Team’s #5 Aston Martin of Rory Butcher and Jeff Smith completed the top five ahead of the second of the second Trackspeed Porsche in the hands of Jon Minshaw and Phil Keen.

United Autosports’ Audi was seventh fastest, despite missing the final laps of the session. The teams from HorsePower Racing, M-Sport and FF Corse completed the top ten.

Tandy and Ashburn were the best of those teams who took part in the mid-season musical chairs in the paddock. Warren Hughes and Jody Firth, whose move to Triple Eight Race Engineering left the gap at Trackspeed were only 18th fastest, the sister BMW Z4 GT3 in the stable eleventh (#888) and 19th (#88).

Colin White and Tom Sharp, newly onboard the MP Motorsport Aston, were 14th fastest one place ahead of the Jann Mardenborough driven Nissan GT Academy Team RJN, the 2012 Brands Hatch winner making his return to the championship.

With a late lap Bradley Ellis topped the GT4 times in the Twisted Team Parker Ginetta G55 he shares with Adrian Barwick. For much of the session the class had been headed by the ISSY Racing Lotus after an early effort from Gavan Kershaw. Jamie Stanley was third fastest in class in the Fox Motorsport run Ginetta with class points’ leaders Beechdean AMR fourth fastest.

The Toyota G86, making its British GT debut in the invitation class, was 26th fastest overall. The GPRM entered machine will be shared between James Fletcher and Stefan Hodgetts for the weekend.